Patti Galle , from The Hacker News Editorial Staff wrote an Article in THN Magazine January Edition. We would like to share this read with all of our site readers.
Rebellions are most always rooted in a call for justice, decency and morality. World history is full of countless rebellions against despots and others who did not conform to the will of the people. And as inequality grows to absurd new heights around the world and institutions of power are considered fundamentally dishonest, corrupt, and leaders no longer command the respect and confidence of the people then you have societies where social upheaval is inevitable. Rebellions spring up against fraudulent power and authority, and it is grounded in real outrage against mass murder (neo-imperialism, neo-colonialism), violation of human rights (torture, war crimes), widespread lying and hypocrisy, endemic political corruption, unrestrained thirst for money and power, and unprecedented greed, which all lead to economic chaos. Therefore, when critical masses of people feel profoundly aggrieved, they rise up in anger and demand "Change".
The vehicle by which a people's rebellion originally manifests itself is most always material in nature. It may appear that the Arab Spring was about rising food prices or the Occupy Wall Street protests, the London riots, the rioting in Greece, Spain and Chile are about money and jobs, but these causes are merely the sparks that have ignited a bonfire globally, a bonfire that has been years in creation. If we look closer it is simple to uncover the core reason for the simmering discontent that is now engulfing the globe. It is that the youth of the world cannot envision or recognize a future in the existing corrupted world system.

The world wide economic crisis has produced untold legions of unemployed youth worldwide. Ever since the beginning of the economic crisis, 2007 to 2009, youth unemployment increased by 7.8 million on a global level (1.1 million in 2007-2008 and 6.6 million in 2008-2009). Putting these figures into perspective; over the course of the ten-year period prior to the current crisis (1996-1997 to 2006-2007), the number of unemployed youth increased, on average, by 192,000 per year. But by 2009 there were 80.7 million beleaguered young people struggling to find work. Recent studies have projected that a mere 1 percentage point increase in unemployment in the United States results in a 6 to 7 per cent decrease in the wages of college graduates. And while the wage cost lessens with time, it still remains statistically significant 15 years later. And the length time it takes to find a job is increasing as more than one in five unemployed youth in Germany, Spain and the United Kingdom have been unemployed for longer than one year.
And we are witnessing more and more young people in every country of the world become increasingly discouraged and are leaving the labor market for good. In addition, young people around the world are witness to their own parents being laid off, causing families to collapse financially. The youth of the world are now seeing that they have been robbed of a viable future. We are witnessing, on an unprecedented global scale, a grassroots rebellion lead and inspired by the youth of the world; a rebellion birthed spontaneously out of many heartrending cries for justice and equality; but I believe that this "spontaneous" rebellion has been decades in the making, and has wide-ranging and a deep intellectual foundation and that the final chapter is still extremely uncertain and many developments good and bad can take place before a final chapter is written and a new era emerges.
Change happens when a sufficient amount of people arrive at the belief that the materialistic, greedy elite and corporations have taken complete control of their societies and their governments. They are also annihilating and devastating the whole world and everyone's future in the process making a recipe for more than "Passionate Protests." Now you have "Rebellion." We live in a volatile time when our entire planet finds itself in the throes of an ongoing protest that is teetering on the brink of full scale Rebellion. This revolution will last out the decade and revolutionize the world and will have a transformative impact socially, politically and economically world wide as we face a new era.
I hope with all my heart, at this point in world history, that young people all over the world are wakening, and in large numbers are preparing themselves to rise to the immense challenge facing us and all citizens of the world. And to everyone the world over . . . . . To the young and to the old, to men and to women and to each and every child ~ "In-action is not an option".
Considering the alternatives, other than servitude, what do we have to lose? 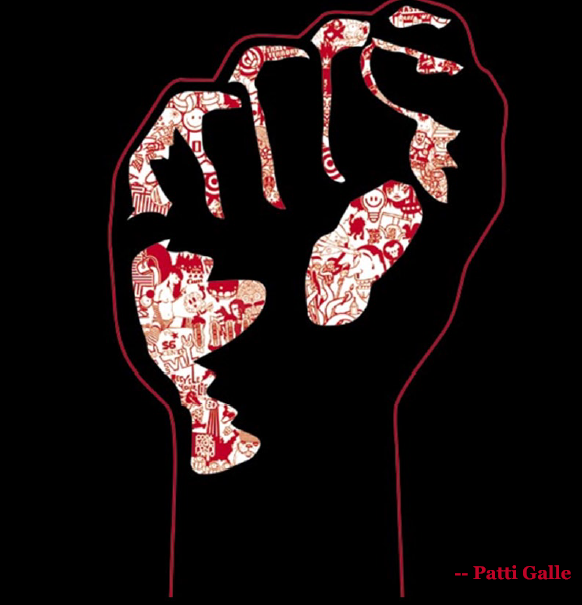