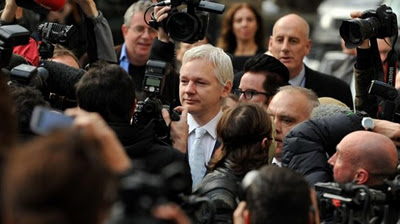 Wikileaks Founder Julian Assange has fired his lawyer in favour of one with experience in batting for The Pirate Bay, according to a Swedish news report. Julian Assange has ditched his Swedish legal counsel and lined up a new defence team in readiness for a likely return to the country to face allegations of sexual molestation and rape against two women.
Assange has filed a petition with the Stockholm District Court, says the newspaper, and communicated his desire to change his representation to attorneys Per Samuelson and Thomas Olsson. Olsson is reviewing the case already, but has little to say on the motives behind Assange's decision. "He'll have to explain his motivation behind changing defenders," he told The Local. Samuelson previously represented financier Carl Lundström, one of the four defendants in the 2009 Pirate Bay trial, all of whom were found guilty.