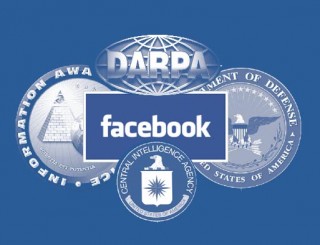 The Truth about who owns facebook. In todays world of advanced modern technology, there are billions of people that use Internet as a means of communication. The era of Big Brother is upon us. George Orwell predicted it and, now we live it.

Every day just walking down the street for a burger, our faces are recorded on numerous camera's. Even whilst waiting for our burgers to burn, our image is being burned elsewhere.

Todays society is a paranoid one, and rightly so. We are never really alone. Business' record every keystroke and every action in an employee's day.

International Intelligence agencies scan and flag any messages containing certain buzz words. Why? Because, as Mulder warned us (and Sculley) weekly for many years, "The truth is out there!"

The question has been raised that "Face-book" has connections with the CIA.

Facebook has a resource that any secret intelligence agency in the world would die for. Access to over 60 million people's names, addresses, friends, activities, details about them, even phone numbers and emails.

Given the CIA's shady past and repertoire for doing anything to get information they need (You've seen the news yourself: torture, abuse, abductions). You would consider that at least one secret agency would attempt to contact Facebook, the fastest growing social networking website in the world.

"Facebook may also collect information about you from other sources, such as newspapers, blogs, instant messaging services, and other users of the Facebook service through the operation of the service (e.g., photo tags) in order to provide you with more useful information and a more personalized experience.

"By using Facebook, you are consenting to have your personal data transferred to and processed in the United States."

"When you use Facebook, you may set up your personal profile, form relationships, send messages, perform searches and queries, form groups, set up events, add applications, and transmit information through various channels. We collect this information so that we can provide you the service and offer personalized features"

"We may use information about you that we collect from other sources, including but not limited to newspapers and Internet sources such as blogs, instant messaging services, Facebook Platform developers and other users of Facebook, to supplement your profile."

After Facebook was created by Harvard student Mark Zuckerberg in February 2004, it was quite succesful. It was brought to the attention of venture capitalist Peter Thiel, founder and former CEO of Paypal. He invested US$500,000, which really got Facebook of its feet. Facebook's first angel investors appear to be connected to the Central Intelligence Agency (CIA).

Everything is interconnected. Everything is related. DARPA became internationally famous when they launched "Information Awareness Office", a program for the U.S government. It was an abomination of human rights as the Government could browse internet activity, credit card purchase histories, airline ticket purchases, car rentals, tax returns and any other personal details.

Sound familiar? Facebook, people, Facebook. Hopefully we can uncover the truth, make known the link between the CIA, the U.S. government and Facebook. Everything is related.