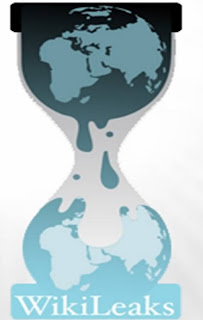 WikiLeaks is among the 241 Nobel Peace Prize nominees this year. The nominees come from 53 organizations and are greater in number than in any previous year.

Nobel-watcher and Peace Research Institute Oslo Director Kristian Berg Harpviken says he is not surprised WikiLeaks has been nominated and he expects it will receive more than one vote.
"WikiLeaks has been on top of the international news headlines for the last 12 months," he said. "It is also something very new in more ways than just bringing interesting news. It is, in fact, newsworthy in and of itself as a phenomenon. It is an interesting and many ways challenging candidate in its own right."

We did a online Poll voting on this issue and the Results are as shown Below : 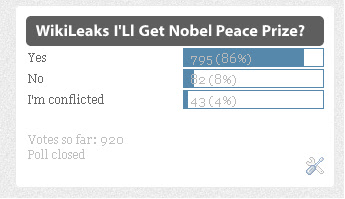 These 241 nominations will be considered by the Nobel Committee, which will create a short list of nominees. The Nobel Peace Prize is awarded by a committee of five people chosen by the Norwegian parliament president. The prizes will be presented on December 10 in Stockholm.