Operation Payback is Back with Target 'Copywrong (TBA)' ! 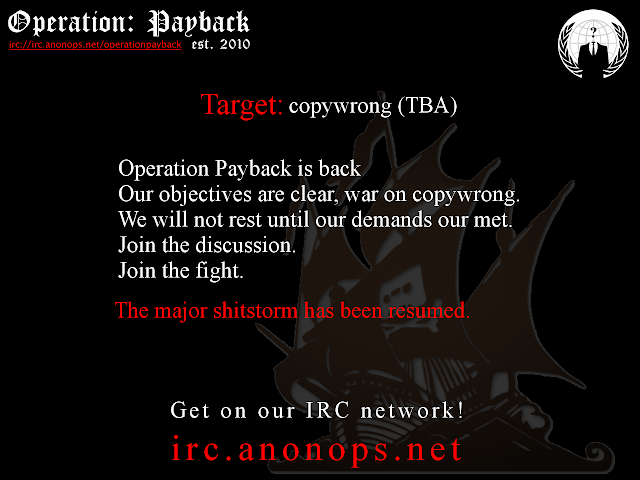 Just Now one more Press Release posted on Anonymous Official Website, that Operation Payback is back ! The Content of the Press Release is as shown below :


Since early 2011, Anonymous has busied itself with very successful operations which it can be very much proud of.
Not only has Anonymous proven that it is a force to be reckoned with, it has grown in strength and diversity, and it continues to gain numbers and attract attention from all over the world.
Anons all over the world can be proud of what they have achieved.
Operation Payback has now begun its "researching" phase, due to some actions taken by some copyright organisations, including "BREIN", who have censored popular sites on the internet over the past couple of weeks. This censorship can't be taken lightly, it is time to avert some attention to them and enable them to realise that this kind of censorship will not be tolerated, Anonymous style.
So, something needs to be done, Anonymous will make sure something is done, by one way or another, by doing what we do best.
Find us at www.AnonOps.net
We are Anonymous
We are Legion
We do not Forgive
We do not Forget
Expect Us