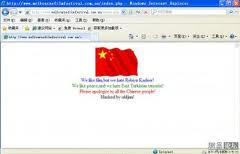 The parliamentary computers of Prime Minister Julia Gillard and at least two other senior ministers are suspected of being hacked.
Ms Gillard's parliamentary computer, along with those of several cabinet ministers including Foreign Minister Kevin Rudd and Defence Minister Stephen Smith were believed to have been compromised, News Ltd newspapers report.
Thousands of emails are believed to have been accessed in the cyber attacks.
Advertisement: Story continues below
Four Australian government sources confirmed with the newspapers they had been told Chinese intelligence agencies were part of a list of suspected hackers.
US intelligence officials alerted their Australian counterparts and News Ltd believes ASIO has started an investigation.
The cyber attacks are believed to be on the Australian Parliament House email network, the less secure of two networks used by MPs.
Ministers use a departmental network for more high security communications.
The newspaper reports senior sources in the government confirmed the computers were subjected to the espionage for more than a month from sometime last month.
Attorney-General Robert McClelland would neither confirm nor deny the attacks.