February 22, 2011Mohit Kumar
It's gigantic ! It can handle over 100 simultaneous touch points! It has a curvature of 135 degrees! And best of all, it is NOT the newest, insanely expensive gadget to hit the market. Instead, this touchscreen was hacked together with a bunch of PCs, video cameras, projectors and cheap infrared illuminators at the University of Groningen, in the Netherlands. 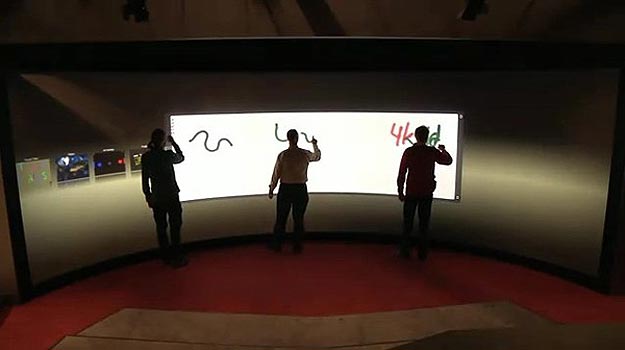 It works like this: "The cameras, illuminators and projectors are all placed behind a large, cylindrical screen (formally used as a 3D theater). Due to the diffuse layer on the front side of the screen, the cameras cannot see clearly through the screen, however whenever someone touches the screen, enough of the infrared light is reflected back to see the tip of the finger. The difference is very small (on a scale of 0-255 the difference is only 2 or 3), but still big enough to be seen by the computers that analyze the images from the cameras."
The display is used to teach mathematics and computer science students the elusive concept of interactivity.