WikiLeaks nominated for Nobel Peace Prize,Truth is the most powerful weapon against Injustice ! ! 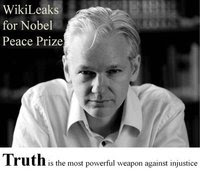 A Norwegian politician said he called Wikileaks for the Nobel Peace, referring to the site's contribution to "democracy and freedom" around the world.

Nominations for the price of peace is closed Tuesdays. Any beneficiary legislator, academic or award in the world can nominate anyone for the price, according to the website of the Prize.

Storting parliament Snorre Valen Wikileaks said on condition that contributed to "draw a map of the freedom of information."

"Xiabao Liu was awarded the Nobel Peace Prize last year, fought for human rights, democracy and freedom of expression in China," Valen wrote on his blog. "Similarly, Wikileaks took part in the battle those same values throughout the world, exposing (among many other things), corruption, war crimes and torture."

Wikileaks is a site that publishes documents concerning its business and neglect of the government. Critics have accused of endangering national security, while the defenders have said that protect whistleblowers.

The site has published numerous secret documents, including the war in Iraq and Afghanistan.

Military officials have criticized the publication of documents. U.S. Defense Secretary Robert Gates said he was "appalled" by the release schedule of war in Afghanistan last year.