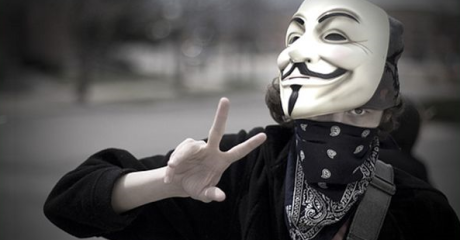 When the activists, who called themselves Anonymous, found out they were being investigated by the Internet security company HBGary Federal, the group hacked the company's servers and stole thousands of private e-mails. And then it dumped them onto the Internet.

It was an embarrassment for the security company to get hacked — but the content of some of those e-mails is raising concerns.

'Brazen' E-mails
HBGary Federal was trying to use social networks to unmask the members of Anonymous, so Anonymous struck back.

One man, who calls himself Owen, says his Anonymous colleagues broke into the company's servers. Hackers have a name for what they did.

"They decided to just rape his servers and take all the information they wanted," he says. "Forgive that term ... 'Rape' is an Internet term, you know, as to go in and take everything out of somebody's server."

Whatever the term, it was not a nice thing that Anonymous did to HBGary Federal. But now that the company's e-mails are out, it appears it was also willing to do some not-nice things.

One e-mail contains a business proposal for Bank of America, which is rumored to be the subject of a future document dump by WikiLeaks. The e-mail suggests feeding fake documents to WikiLeaks to discredit it.

It also suggests pressuring WikiLeaks supporters in the media. One PowerPoint slide says, "Most of them if pushed will choose professional preservation over cause."

One of those singled out is Glenn Greenwald, a blogger on Salon.com.

"For me, what was most striking about them is just the brazen willingness to commit these sorts of proposals onto paper," Greenwald says.

Greenwald points to another e-mail, which proposes a campaign on behalf of the U.S. Chamber of Commerce to discredit the Chamber's critics by spreading misinformation on social networks. In that proposal, HBGary Federal appears to be working with two other government contractors — Palantir Technologies and Berico Technologies — and Greenwald says it offers a glimpse into these companies' real attitudes.

"These are pretty serious, well-connected players, who are directly involved in creating these kinds of proposals," he says. "So while the proposal itself is laughable in one sense, in another sense the fact that this just seems so routine to people like this is what I think deserves some more attention."

Palantir Technologies and Berico Technologies say they've cut their ties to HBGary Federal. And Bank of America and the U.S. Chamber of Commerce say they did not employ the plans described in the e-mails.

HBGary Federal would not comment, but NPR did reach Jim Butterworth, a vice president at HBGary Inc. — a company with close ties to HBGary Federal. Its e-mails were also stolen, and its website also hacked.

"They've come at us pretty hard," Butterworth says. "And people have to know — it hasn't stopped."

Lessons In Transparency
The attacks on HBGary Inc. have become a little more mundane — lately, somebody keeps trying to make the company's fax machine run out of paper.

Butterworth says he doesn't know anything about the proposals revealed in the e-mails, but he doesn't think Anonymous has any right to brag about the information exposed.

Butterworth makes it clear he's not about to take lessons in transparency from a group that calls itself Anonymous.
Source : Google