Feb 21, 2011Mohit Kumar
Anonymous Apologize for their Kindness & Effort,
Anonymous Press Release 20 Feb,2011 (Must Read) !
NOTE : One More Press Released By Anonymous Hackers on there official site/Facebook/Twitter. We are Publishing This news, just as the Media of "Hacking Field" . These is No relation b/w 'The Hacker News' & 'Anonymous Hackers'. 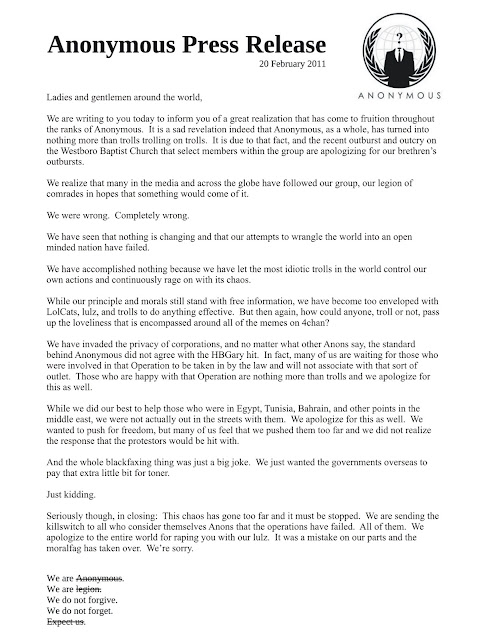 The Complete Message Written by them is as given Following :
Ladies and gentlemen around the world, We are writing to you today to inform you of a great realization that has come to fruition throughout the ranks of Anonymous. It is a sad revelation indeed that Anonymous, as a whole, has turned into nothing more than trolls trolling on trolls. It is due to that fact, and the recent outburst and outcry on the Westboro Baptist Church that select members within the group are apologizing for our brethren’s outbursts. We realize that many in the media and across the globe have followed our group, our legion of comrades in hopes that something would come of it. We were wrong. Completely wrong. We have seen that nothing is changing and that our attempts to wrangle the world into an open minded nation have failed. We have accomplished nothing because we have let the most idiotic trolls in the world control our own actions and continuously rage on with its chaos. While our principle and morals still stand with free information, we have become too enveloped with LolCats, lulz, and trolls to do anything effective. But then again, how could anyone, troll or not, pass up the loveliness that is encompassed around all of the memes on 4chan? We have invaded the privacy of corporations, and no matter what other Anons say, the standard behind Anonymous did not agree with the HBGary hit. In fact, many of us are waiting for those who were involved in that Operation to be taken in by the law and will not associate with that sort of outlet. Those who are happy with that Operation are nothing more than trolls and we apologize for this as well. While we did our best to help those who were in Egypt, Tunisia, Bahrain, and other points in the middle east, we were not actually out in the streets with them. We apologize for this as well. We wanted to push for freedom, but many of us feel that we pushed them too far and we did not realize the response that the protestors would be hit with. And the whole blackfaxing thing was just a big joke. We just wanted the governments overseas to pay that extra little bit for toner. Just kidding. Seriously though, in closing: This chaos has gone too far and it must be stopped. We are sending the killswitch to all who consider themselves Anons that the operations have failed. All of them. We apologize to the entire world for raping you with our lulz. It was a mistake on our parts and the moralfag has taken over. We’re sorry.
We are Anonymous
We are legion
We do not forgive
We do not forget
Expect us.