Cops hunt for the hacker who tapped Y P Singh's phone in 60 seconds !

Dec 28, 2011Mohit Kumar
News Taken From mumbaimirror.com, The news is as follows... 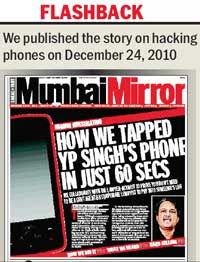 A day after Mumbai Mirror exposed how small-time detectives and software professionals offer phone-tapping services illegally, the Thane Crime Branch set up an inquiry into the matter. Mumbai Mirror had on Friday done an exposé on how a Thane-based detective, Sachin Loke, helped us tap the phone of an Indian Police Service officer-turned-lawyer Y P Singh (see box).


Two police teams have been put on the job to track down the detective whose whereabouts are still unknown.

Two teams, including officers of the Cyber Crime Cell, have been set up under the aegis of Deputy Commissioner of Police Datta Karale. "Yes, an inquiry has been launched. As the detective is absconding, I cannot divulge any information yet," said Karale.

The police have also roped in a software expert from the National Association of Software and Services Companies (Nasscom) to aid in technical nitty-gritty of the investigation.

"The police commissioner has taken the news report very seriously. In fact, the teams swung into action within less than 24 hours after the report appeared," said a Thane Crime Branch officer. Tracking down the detective will, however, take a while, the officer said. "His address is unknown and we have sought help from his cellphone service provider for the same," the officer said.

Meanwhile, a separate police team is trying to zero in on Loke through a network of software professionals and private detectives.

The Nasscom engineer, who did not wish to be named, said the detective's technical abilities are of interest to them.

"The wares he sells are illegal and dangerous. We want to know how much of knowledge he and others of his ilk possess," the engineer said.

"It will help us devise awareness programmes to help unsuspecting users to pre-empt tapping trouble."

On Friday, we carried an exposé on how Thane-based detective, Sachin Loke, helped us tap the phone of former IPS officer Y P Singh. He made us cough up Rs 20,000 for the software he used for this.

As promised, we could eavesdrop on every conversation that Singh had and it also gave us a peek into every text message he received and sent.