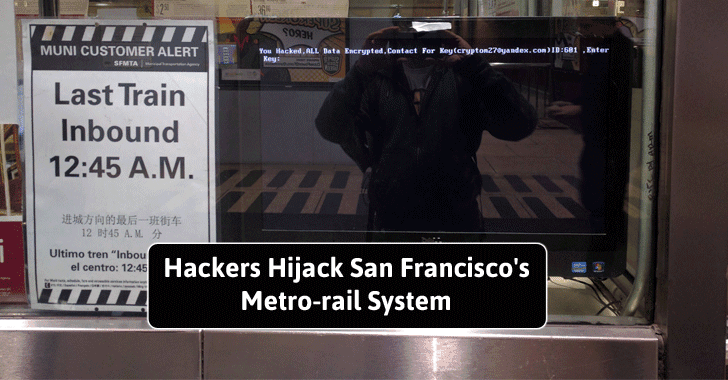 November 28, 2016Swati Khandelwal
Nothing is immune to being hacked when hackers are motivated. The same proved by hackers on Friday, when more than 2,000 computer systems at San Francisco's public transit agency were apparently got hacked. San Francisco's Municipal Transportation Agency, also known as MUNI, offered free rides on November 26th after MUNI station payment systems and schedule monitors got hacked by ransomware and station screens across the city started displaying a message that reads: " You Hacked, ALL Data Encrypted. Contact For Key(cryptom27@yandex.com)ID:681 ,Enter. " According to the San Francisco Examiner, MUNI confirmed a Ransomware attack against the station fare systems, which caused them to shut down ticket kiosks and make rides free this weekend. As you can see, the above message delivered by the malware followed by an email address and ID number, which can then be used to arrange ransom payments. MUNI Spokesman Paul Rose said his agency was investigating the m
Next Page 