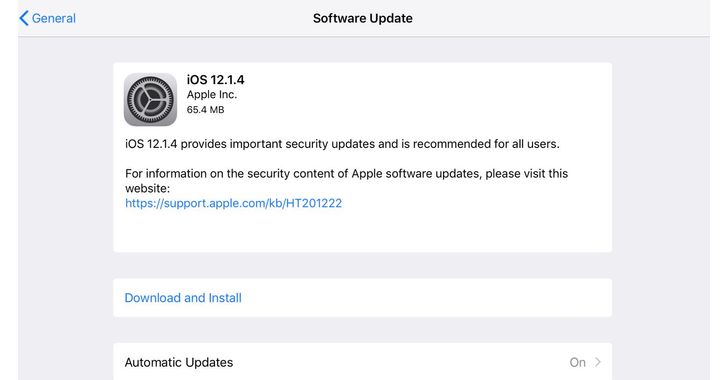 February 07, 2019Swati Khandelwal
Apple has finally released iOS 12.1.4 software update to patch the terrible Group FaceTime privacy bug that could have allowed an Apple user to call you via the FaceTime video chat service and hear or see you before you even pick up the call without your knowledge. The Facetime bug (CVE-2019-6223) was discovered by 14-year-old Grant Thompson of Catalina Foothills High School while he was trying to set up a Group FaceTime session with his friends. Thompson reported the bug to the company a week before it made headlines across the internet, forcing Apple to temporarily disable the group calling feature within FaceTime. In its advisory published Thursday, Apple described the bug as "a logic issue existed in the handling of Group FaceTime calls," that also impacted the group FaceTime calling feature on Apple's macOS Mojave 10.14.2. Along with Thompson, Apple has also credited Daven Morris of Arlington, Texas, in its official advisory for reporting this bug. Acc 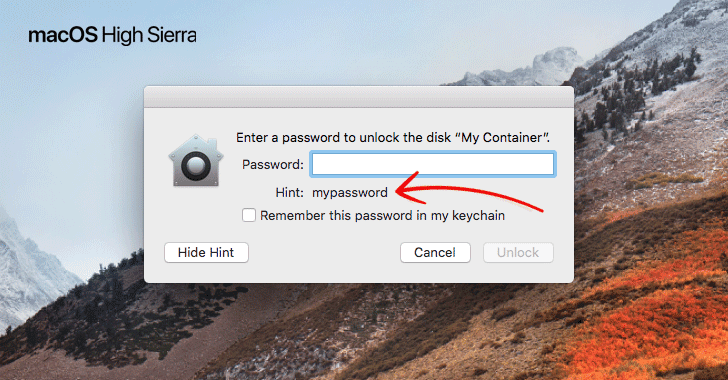 October 06, 2017Unknown
A severe programming error has been discovered in Apple's latest macOS High Sierra 10.13 that exposes passwords of encrypted Apple File System (APFS) volumes in plain text. Reported by Matheus Mariano, a Brazilian software developer, the vulnerability affects encrypted volumes using APFS wherein the password hint section is showing the actual password in the plain text. Yes, you got that right—your Mac mistakenly reveals the actual password instead of the password hint. In September, Apple released macOS High Sierra 10.13 with APFS (Apple File System) as the default file system for solid-state drives (SSDs) and other all-flash storage devices, promising strong encryption and better performance. Mariano discovered the security issue while he was using the Disk Utility in macOS High Sierra to add a new encrypted APFS volume to a container. When adding a new volume, he was asked to set a password and, optionally, write a hint for it. So, whenever the new volume is mounted, m
Next Page 