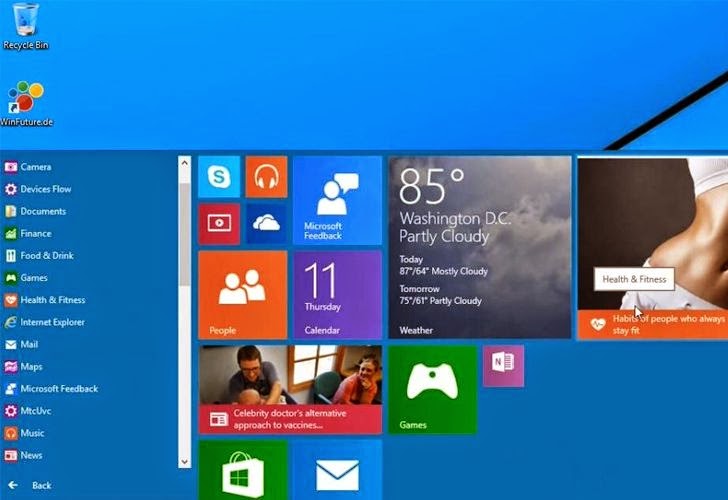 September 13, 2014Swati Khandelwal
After providing the glimpses of the next Windows, one of the screenshot leakers has now obtained a short video showing off a build of the very new Windows 9 , aka "Threshold , " features as well as how users can expect to use it. Two German sites, ComputerBase and WinFuture , posted 20 screenshots on Thursday of what purports to be next major version of Windows, presumably called Windows Threshold that Microsoft recently distributed to its partners, giving us a closer look at Microsoft's next platform. Now, there's a video on YouTube , provided by German publication WinFuture, which shows how the returning feature might work in the next iteration of the Operating System. As calculated from the screenshots, the video doesn't provide any major new information about Windows 9, but pretty much confirms what we expected. The video gives Windows' users a first look at the new Start menu in action. It also shows off three new features in Windows 9:
Next Page 
Popular This Week
New Wi-Fi Encryption Vulnerability Affects Over A Billion Devices
Install Latest Chrome Update to Patch 0-Day Bug Under Active Attacks
Firefox enables DNS-over-HTTPS by default (with Cloudflare) for all U.S. users
Microsoft Brings Defender Antivirus for Linux, Coming Soon for Android and iOS
New LTE Network Flaw Could Let Attackers Impersonate 4G Mobile Users
GhostCat: New High-Risk Vulnerability Affects Servers Running Apache Tomcat
Google Advises Android Developers to Encrypt App Data On Device
Free Download: The Ultimate Security Pros' Checklist
Exclusive Offers