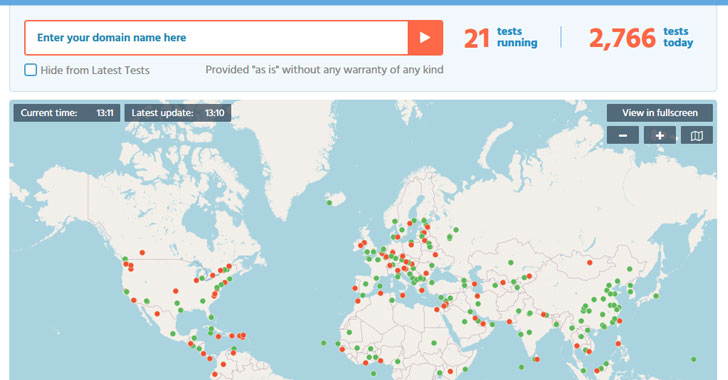 May 28, 2020
Last week, application security company ImmuniWeb released a new free tool  to monitor and measure an organization's exposure on the Dark Web. To improve the decision-making process for cybersecurity professionals, the free tool crawls Dark Web marketplaces, hacking forums, and Surface Web resources such as Pastebin or GitHub to provide you with a classified schema of your data being offered for sale or leaked. All you need to launch a Dark Web search is to enter your domain name. The volume of stolen credentials on the Dark Web is booming This week, over 26 million user records, including plaintext passwords, stolen from LiveJournal appeared on a Dark Web marketplace for as low as $35. The present week is likewise sadly marked with a compromise of 31 SQL databases (with 1.6 million rows of client data) from webshop owners. There were 7,098 breaches reported in 2019, exposing over 15.1 billion records, a new worst year on record according to Risk Based Security report

Oct 11, 2018
A dark web drugs kingpin who was arrested last year when he arrived in the United States to compete in the World Beard and Mustache Championships has now been sentenced to 20 years in prison. On Tuesday, U.S. District Judge Robert N. Scola sentenced 36-year-old French national Gal Vallerius, aka "OxyMonster," after pleading guilty to conspiracy to possess with the intent to distribute controlled substances and conspiracy to launder money in June this year. According to a press release published by the U.S. Department of Justice, Vallerius was an administrator, senior moderator and vendor on Dream Market —one of the largest dark web marketplaces for illegal narcotics and drug paraphernalia. Launched in November 2013, Dream Market began operating on the TOR "dark web" network and was designed to make it easier for people to anonymously buy and sell illegal items and services in exchange for Bitcoin and other peer-to-peer cryptocurrencies. Vallerius initi

Oct 17, 2017
Hacking ATM is now easier than ever before. Usually, hackers exploit hardware and software vulnerabilities to hack ATMs and force them to spit out cash, but now anyone can simply buy a malware to steal millions in cash from ATMs. Hackers are selling ready-made ATM malware on an underground hacking forum that anybody can simply buy for around $5000, researchers at Kaspersky Lab discovered after spotting a forum post advertising the malware, dubbed Cutlet Maker . The forum post provides a brief description and a detailed manual for the malware toolkit designed to target various ATMs models with the help of a vendor API, without interacting with ATM users and their data. Therefore, this malware does not affect bank customers directly; instead, it is intended to trick the bank ATMs from a specific vendor to release cash without authorisation. The manual also mentions an infamous piece of ATM malware, dubbed Tyupkin , which was first analysed in 2014 by Kaspersky Lab and used

Jul 06, 2017
AlphaBay Market, one of the largest Dark Web marketplaces for drugs, guns, and other illegal goods, suddenly disappeared overnight without any explanation from its admins, leaving its customers who have paid large sums in panic. AlphaBay , also known as "the new Silk Road," has been shut down since Tuesday night. The site also came in the news at the beginning of this year when a hacker successfully hacked the AlphaBay site and stole over 200,000 private unencrypted messages from several users. Although the website sometimes goes down for maintenance, customers are speculating that the admins have stolen all their Bitcoins for good measure, when heard no words from the site's admins on the downtime. Some users at Reddit and Twitter are claiming that AlphaBay's admins may have shut down the marketplace to withdraw a huge number of bitcoins from the site's accounts. The withdrawal Bitcoin transactions total 1,479.03904709 Bitcoin (roughly $3.8 Million),
Next Page 