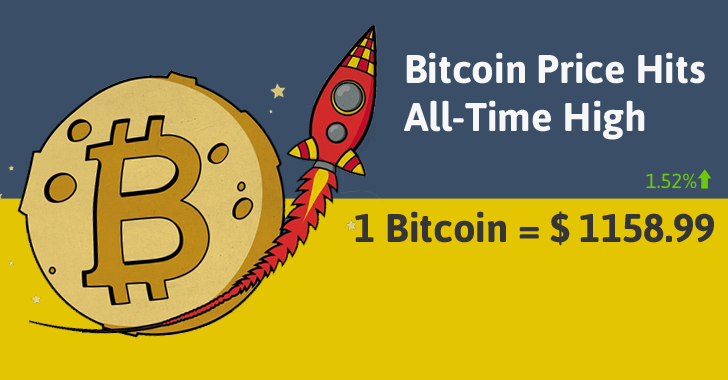 January 04, 2017Mohit Kumar
What a good start of the New Year for those holding Bitcoins! Web-based digital currency Bitcoin has passed $1,110 for the first time on the Bitstamp Price Index (BPI) since early November 2013. Bitcoin broke the barrier on 1 January and now is trading above $1,150 mark at the time of writing, marking a bright beginning to 2017 for the digital currency. At the time of writing, 1 Bitcoin = $1158.99. Bitcoin is a revolutionary virtual currency that has no central authority; instead, it relies on thousands of computers worldwide that validate transactions and add new Bitcoins to the system. The world's first and most famous cryptocurrency is developed around Blockchain, which is a complex cryptographic protocol and a global computer's network that oversees and verifies which Bitcoins have been spent by whom. The identity of the people spending Bitcoins is extremely difficult to trace because of its anonymous nature. Therefore, the currency is very popular among criminal
Next Page 
Popular This Week
Critical GRUB2 Bootloader Bug Affects Billions of Linux and Windows Systems
17-Year-Old 'Mastermind', 2 Others Behind the Biggest Twitter Hack Arrested
Undetectable Linux Malware Targeting Docker Servers With Exposed APIs
Zoom Bug Allowed Snoopers Crack Private Meeting Passwords in Minutes
Industrial VPN Flaws Could Let Attackers Target Critical Infrastructures
New Attack Leverages HTTP/2 for Effective Remote Timing Side-Channel Leaks
Online Courses and Software