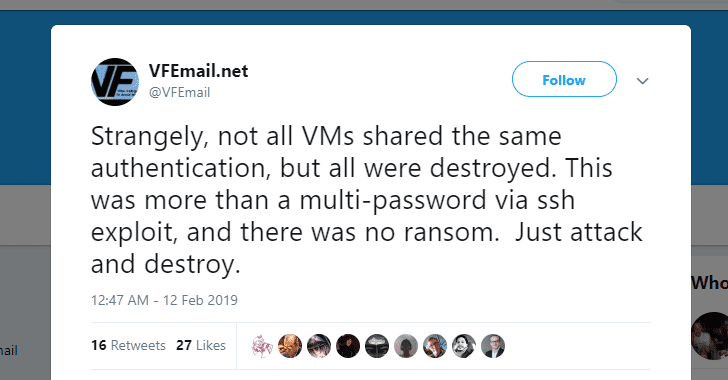 February 13, 2019Swati Khandelwal
What could be more frightening than a service informing you that all your data is gone—every file and every backup servers are entirely wiped out? The worst nightmare of its kind. Right? But that's precisely what just happened this week with VFEmail.net, a US-based secure email provider that lost all data and backup files for its users after unknown hackers destroyed its entire U.S. infrastructure, wiping out almost two decades' worth of data and backups in a matter of few hours for no apparent reason. Started in 2001 by Rick Romero, VFEmail provides secure, private email services to companies and end users, both free and paid-for. Describing the attack as "catastrophic," the privacy-focused email service provider revealed that the attack took place on February 11 and that "all data" on their US servers—both the primary and the backup systems—has been completely wiped out, and it's seemingly beyond recovery. "Yes, @VFEmail is effectivel
Next Page 
Popular This Week
Bug in Popular WinRAR Software Could Let Attackers Hack Your Computer
Windows 10, Linux, iOS, Chrome and Many Others at Hacked Tianfu Cup 2021
Malicious NPM Packages Caught Running Cryptominer On Windows, Linux, macOS Devices
Hackers Set Up Fake Company to Get IT Experts to Launch Ransomware Attacks
REvil Ransomware Gang Goes Underground After Tor Sites Were Compromised
Popular NPM Package Hijacked to Publish Crypto-mining Malware