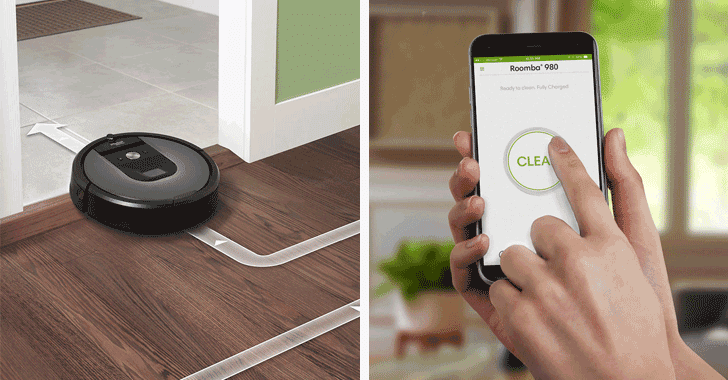 July 26, 2017Swati Khandelwal
What if I say that your cute, smart robotic vacuum cleaner is collecting data than just dirt? During an interview with Reuters, the CEO of iRobot, the company which manufactured Roomba device, has revealed that the robotic vacuum cleaner also builds a map of your home while cleaning — and is now planning to sell this data to third-party companies. I know it sounds really creepy, but this is what the iRobot company has planned with the home mapping data its Roomba robots collect on its users. What is Roomba? Manufactured by Massachusetts-based firm iRobot, Roomba is a cute little robotic vacuum cleaner — which ranges in price from $375 to $899 — that has been vacuuming up household dirt since 2002. Early versions of Roomba used IR or laser sensors to avoid obstacles in their way, but the company began distributing high-end Wi-Fi-connected Roomba models from 2015, such as the Roomba 980, which includes a camera and Simultaneous Localisation And Mapping (SLAM) technology tha
Next Page 