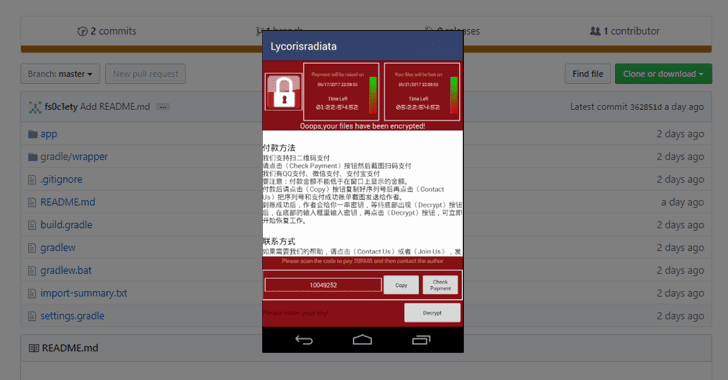 Jul 24, 2017
Bad news for Android users — Decompiled source code of for one of the oldest mobile and popular Android ransomware families has been published online, making it available for cyber criminals who can use it to develop more customised and advanced variants of Android ransomware. Decompiled source code for the SLocker  android ransomware, which saw a six-fold increase in the number of new versions over the past six months, has just been published on GitHub and is now available to anyone who wants it. The SLocker source code has been published by a user who uses 'fs0c1ety' as an online moniker and is urging all GitHub users to contribute to the code and submit bug reports. SLocker or Simple Locker is mobile lock screen and file-encrypting ransomware that encrypts files on the phone and uses the Tor for command and control (C&C) communication. The malware also posed as law enforcement agencies to convince victims into paying the ransom. Famous for infecting thousands

Mar 11, 2017
Bought a brand new Android Smartphone? Do not expect it to be a clean slate. At least 36 high-end smartphone models belonging to popular manufacturing companies such as Samsung, LG, Xiaomi, Asus, Nexus, Oppo, and Lenovo, which are being distributed by two unidentified companies have been found pre-loaded with malware programs. These malware infected devices were identified after a Check Point malware scan was performed on Android devices. Two malware families were detected on the infected devices: Loki and SLocker. According to a blog post published Friday by Check Point researchers, these malicious software apps were not part of the official ROM firmware supplied by the smartphone manufacturers but were installed later somewhere along the supply chain, before the handsets arrived at the two companies from the manufacturer's factory. First seen in February 2016, Loki Trojan inject devices right inside core Android operating system processes to gain powerful root privi
Next Page 