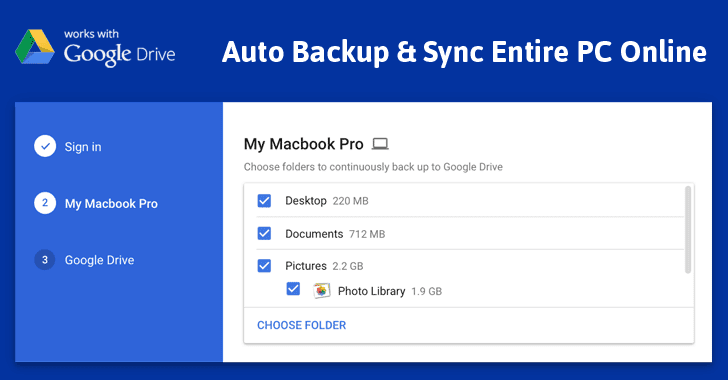 June 15, 2017Wang Wei
Soon you will be able to auto backup and sync your whole computer on Google Drive. Yes, you heard that right. By the end of this month, Google will launch Backup and Sync — a new, simple tool that has been designed to help you backup not only your documents and photos in the cloud but your entire computer as well. Data loss is always the worst thing that can happen to anyone, so having backups of all your data is always a good idea. Also, having regular backups can save you and your company in the events of data breaches and ransomware attacks. "On June 28th, 2017, we will launch Backup and Sync from Google, a tool intended to help everyday users back up files and photos from their computers, so they're safe and accessible from anywhere," reads Google's post on the G Suite Blog. The Backup and Sync tool will replace the current Google Drive uploader client for Mac/PC, and will also be integrated into the desktop Google Photos uploader. So, instead of creati
Next Page 
Popular This Week
Facebook Messenger Bug Lets Hackers Listen to You Before You Pick Up the Call
Google Hacker Details Zero-Click 'Wormable' Wi-Fi Exploit to Hack iPhones
Experts Uncover 'Crutch' Russian Malware Used in APT Attacks for 5 Years
4 Free Online Cyber Security Testing Tools For 2021
TrickBot Malware Gets UEFI/BIOS Bootkit Feature to Remain Undetected
Several Unpatched Popular Android Apps Put Millions of Users at Risk of Hacking
Online Courses and Software