May 27, 2022
Researchers have demonstrated what they call the "first active contactless attack against capacitive touchscreens." GhostTouch , as it's called, "uses electromagnetic interference (EMI) to inject fake touch points into a touchscreen without the need to physically touch it," a group of academics from Zhejiang University and Technical University of Darmstadt  said  in a new research paper. The core idea is to take advantage of the electromagnetic signals to execute basic touch events such as taps and swipes into targeted locations of the touchscreen with the goal of taking over remote control and manipulating the underlying device. The attack, which works from a distance of up to 40mm, hinges on the fact that  capacitive touchscreens  are sensitive to EMI, leveraging it to inject electromagnetic signals into transparent electrodes that are built into the touchscreen so as to register them as touch events. The experimental setup involves an electrostatic gun 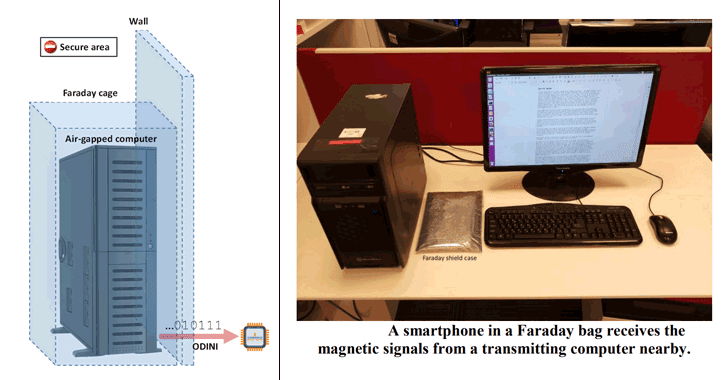 Feb 08, 2018
A team of security researchers—which majorly focuses on finding clever ways to get into air-gapped computers by exploiting little-noticed emissions of a computer's components like light, sound and heat —have published another research showcasing that they can steal data not only from an air gap computer but also from a computer inside a Faraday cage. Air-gapped computers are those that are isolated from the Internet and local networks and so, are believed to be the most secure devices that are difficult to infiltrate. Whereas, Faraday cages are metallic enclosures that even blocks all electromagnetic signals, such as Wi-Fi, Bluetooth, cellular and other wireless communications, making any device kept inside the cage, even more, isolate from outside networks. However, Cybersecurity Research Center at Israel's Ben Gurion University, directed by 38-year-old Mordechai Guri, has developed two techniques that helped them exfiltrate data from computers placed inside a Faraday

Sep 05, 2016
Air-gapped computers that are isolated from the Internet or other networks and believed to be the most secure computers on the planet have become a regular target in recent years. A team of researchers from Ben-Gurion University in Israel has discovered a way to extract sensitive information from air-gapped computers – this time using radio frequency transmissions from USB connectors without any need of specialized hardware mounted on the USB. Dubbed USBee , the attack is a significant improvement over the NSA-made USB exfiltrator called CottonMouth that was mentioned in a document leaked by former NSA employee Edward Snowden. Unlike CottonMouth , USBee doesn't require an attacker to smuggle a modified USB device into the facility housing the air-gapped computer being targeted; rather the technique turns USB devices already inside the facility into an RF transmitter with no hardware modification required. Must Read: BadUSB Code Released – Turn USB Drives Into Undete
Next Page 