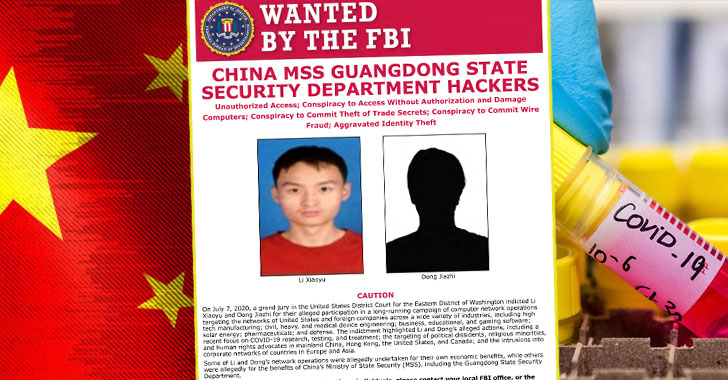 The U.S. Department of Justice (DoJ) yesterday revealed charges against two Chinese nationals for their alleged involvement in a decade-long hacking spree targeting dissidents, government agencies, and hundreds of organizations in as many as 11 countries.

The 11-count indictment, which was unsealed on Tuesday, alleges LI Xiaoyu (李啸宇) and DONG Jiazhi (董家志) stole terabytes of sensitive data, including from companies developing COVID-19 vaccines, testing technology, and treatments while operating both for private financial gain and behalf of China's Ministry of State Security.

"China has now taken its place, alongside Russia, Iran and North Korea, in that shameful club of nations that provide a safe haven for cyber criminals in exchange for those criminals being 'on call' to work for the benefit of the state, [and] to feed the Chinese Communist party's insatiable hunger for American and other non-Chinese companies' hard-earned intellectual property, including COVID-19 research," said Assistant Attorney General John C. Demers, who leads the DoJ's National Security Division.

The pair, who are currently wanted by the U.S. Federal Bureau of Investigation, came under the radar after they compromised a U.S. Department of Energy network in Hanford, which is home to a decommissioned nuclear production complex located in the state of Washington.

Aside from this breach, the individuals in questions have been accused of infiltrating the networks of companies spanning high tech manufacturing, industrial engineering, defense, educational, gaming software, and pharmaceutical sectors with an aim to steal trade secrets and other confidential business information.

Besides the U.S., a number of victim organizations are based in Australia, Belgium, Germany, Japan, Lithuania, the Netherlands, Spain, South Korea, Sweden, and the U.K. In all, the targeted cyberattacks lasted over a period of more than ten years, starting around September 1, 2009, and continuing through July 7, 2020, the DoJ said.


According to the indictment, the hackers gained an initial foothold to the companies by exploiting insecure default configurations or freshly disclosed security flaws in popular software that hadn't yet been patched.

The two suspects, then, installed credential-stealing software to gain deeper access and leveraged web shells to execute malicious programs, and transfer the data in the form of compressed RAR files, but not before changing their extensions to ".JPG" to mask the exfiltration process in the form of innocuous images.

The stolen data, which ran into hundreds of gigabytes, consisted of source code, information about drugs under active development, weapon designs, and personally identifiable information, the DoJ noted.

What's more, all the malicious activities were performed on the Recycle Bin of the targeted Windows systems, using it to load the executables into specific folders and save the RAR files.

"In at least one instance, the hackers sought to extort cryptocurrency from a victim entity, by threatening to release the victim's stolen source code on the Internet," the DoJ said. "More recently, the defendants probed for vulnerabilities in computer networks of companies developing COVID-19 vaccines, testing technology, and treatments."

It's Not Just China


The development is all the more significant since it comes just months after both the FBI and Homeland Security warned that China was actively trying to steal data from organizations working on COVID-19 research and amid mounting tensions between the U.S. and China over national security concerns.

But China isn't the only nation that's been accused of using its offensive cyber capabilities to steal coronavirus research.

In May, Iran-backed hackers purportedly targeted U.S. drugmaker Gilead, whose antiviral drug remdesivir has been proven to trigger an immune response in patients infected with COVID-19.

Then last week, the U.K.'s National Cyber Security Centre (NCSC) alleged that hackers linked to Russian intelligence services (APT29 or CozyBear) had targeted companies researching a coronavirus vaccine in the U.S., U.K., and Canada without specifying which organizations had been targeted, or whether any information had been stolen. Russia has denied the allegations.

Li and Dong are charged with identity theft, conspiracy to commit wire fraud, theft of trade secrets, and violating anti-hacking laws, all of which collectively carry a maximum sentence of over 40 years.