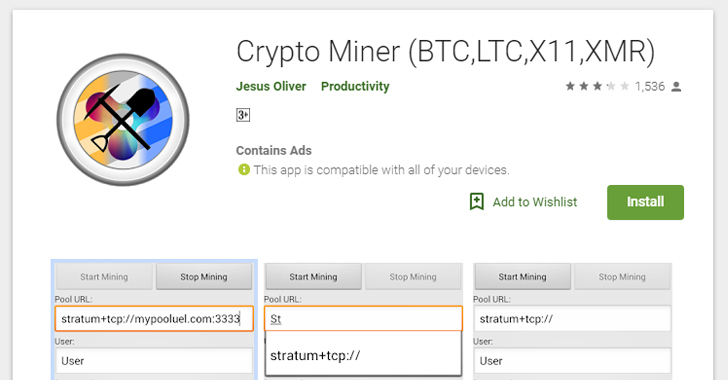 Following Apple's lead in banning cryptocurrency mining apps, Google has also updated its Play Store policy this week to ban apps that mine cryptocurrencies on users' devices in the background.

However, there are countless cryptocurrency mining apps, including MinerGate, AA Miner, NeoNeonMiner, and Crypto Miner, still available on the Play Store.

Cryptocurrency mining is not a new concept, but the technology has recently been abused in the past year after hackers found it a great way to make millions of dollars by hijacking PCs to secretly mine cryptocurrency in the background without their users' knowledge or consent.

Due to this practice, cryptocurrency mining has emerged as one of the biggest threats, raising negative sentiments towards this alternative revenue scheme, and big tech giants like Apple and Google took strict measures to put restrictions on such apps.

Over a month ago, Apple updated its App Store guidelines to ban cryptocurrency mining apps and advertisements from its App Store, and now the same has followed by Google.

Google has updated its Play Store Developer Policy to explicitly ban several more categories of Android apps, including those that utilize a device's CPU for mining cryptocurrencies.

However, "apps that remotely manage the mining of cryptocurrency" are not included in the ban.

In addition to cryptocurrency miners, the search engine giant has also banned several more categories of apps from its digital marketplace, including:


This is the latest improvement in a series of crackdowns on cryptocurrency mining apps or ads enforced by major tech companies.