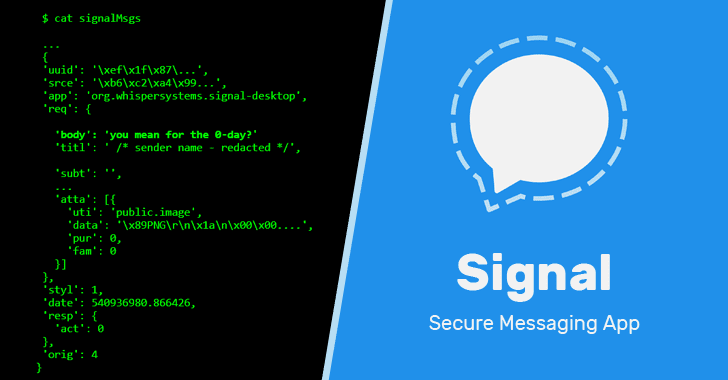 It turns out that macOS client for the popular end-to-end encrypted messaging app Signal fails to properly delete disappearing (self-destructing) messages from the recipient's system, leaving the content of your sensitive messages at risk of getting exposed.

For those unaware, the disappearing messages in Signal self-destruct after a particular duration set by the sender, leaving no trace of it on the receiver's device or Signal servers.

However, security researcher Alec Muffett noticed that the messages that are supposed to be "disappearing" can still be seen—even if they are deleted from the app.

Another security researcher Patrick Wardle reproduced the issue and explained that macOS makes a copy (partial for long messages) of disappearing messages in a user-readable database of macOS's Notification Center, from where they can be recovered anytime later.

If you want to keep an on your incoming messages without having to check your inbox obsessively, macOS desktop notifications (banners and alerts) that appear in the upper-right corner of your screen is a great way to alert you of things you don't want to miss.

According to a blog post published by Wardle, if you have enabled notifications for Signal app, the service will show you notifications for the disappearing messages as well in the form of truncated messages (which is generally 1-1.5 lines of the full message).


Wardle suggests either Signal should not provide notifications service for disappearing messages or should explicitly delete such notifications from the system's database when it removes the messages from the app UI.

Meanwhile, to protect the content of your sensitive messages so that no malicious app, hacker or your wife can recover them, you should consider disabling notifications service until Signal patches this issue.