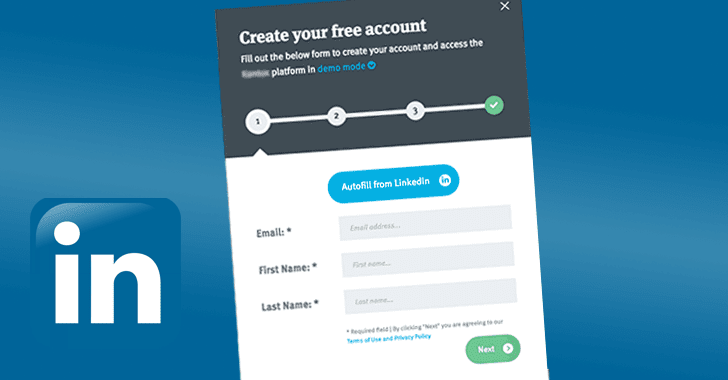 Not just Facebook, a new vulnerability discovered in Linkedin's popular AutoFill functionality found leaking its users' sensitive information to third party websites without the user even knowing about it.

LinkedIn provides an AutoFill plugin for a long time that other websites can use to let LinkedIn users quickly fill in profile data, including their full name, phone number, email address, ZIP code, company and job title, with a single click.

In general, the AutoFill button only works on specifically "whitelisted websites," but 18-year-old security researcher Jack Cable of Lightning Security said it is not just the case.

Cable discovered that the feature was plagued with a simple yet important security vulnerability that potentially enabled any website (scrapers) secretly harvest user profile data and the user would not even realize of the event.

A legitimate website would likely place a AutoFill button near the fields the button can fill, but according to Cable, an attacker could secretly use the AutoFill feature on his website by changing its properties to spread the button across the entire web page and then make it invisible.

Since the AutoFill button is invisible, users clicking anywhere on the website would trigger AutoFill, eventually sending all of their public as well as private data requested to the malicious website, Cable explains.

Here's How attackers can exploit the LinkedIn Flaw:
Cable discovered the vulnerability on April 9th and immediately disclosed it to LinkedIn. The company issued a temporary fix the next day without informing the public of the issue.

The fix only restricted the use of LinkedIn's AutoFill feature to whitelisted websites only who pay LinkedIn to host their advertisements, but Cable argued that the patch was incomplete and still left the feature open to abuse as whitelisted sites still could have collected user data.

Besides this, if any of the sites whitelisted by LinkedIn gets compromised, the AutoFill feature could be abused to send the collected data to malicious third-parties.

To demonstrate the issue, Cable also built a proof-of-concept test page, which shows how a website can grab your first and last name, email address, employer, and location.

Since a complete fix for the vulnerability was rolled out by LinkedIn on April 19, the above demo page might not work for you now.


"We immediately prevented unauthorized use of this feature, once we were made aware of the issue. We are now pushing another fix that will address potential additional abuse cases, and it will be in place shortly," the company said in a statement.

"While we've seen no signs of abuse, we're constantly working to ensure our members' data stays protected. We appreciate the researcher responsible reporting this, and our security team will continue to stay in touch with them."

Although the vulnerability is not at all a sophisticated or critical one, given the recent Cambridge Analytica scandal wherein data of over 87 million Facebook users was exposed, such security loopholes can pose a serious threat not only to the customers but also the company itself.