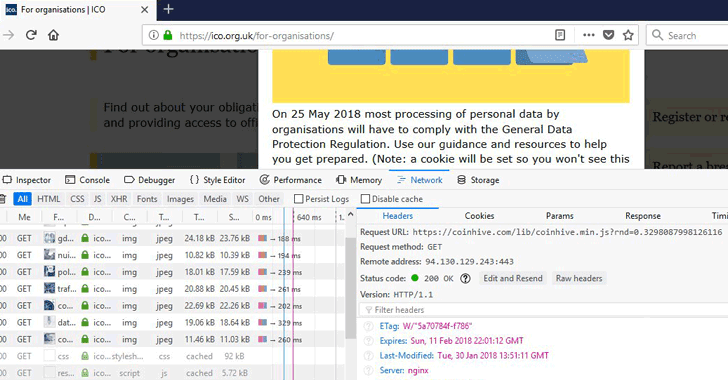 There was a time when hackers simply defaced websites to get attention, then they started hijacking them to spread banking trojan and ransomware, and now the trend has shifted towards injecting scripts into sites to mine cryptocurrencies.

Thousands of government websites around the world have been found infected with a specific script that secretly forces visitors' computers to mine cryptocurrency for attackers.

The cryptocurrency mining script injection found on over 4,000 websites, including those belonging to UK's National Health Service (NHS), the Student Loan Company, and data protection watchdog Information Commissioner's Office (ICO), Queensland legislation, as well as the US government's court system.

Users who visited the hacked websites immediately had their computers' processing power hijacked, also known as cryptojacking, to mine cryptocurrency without their knowledge, potentially generating profits for the unknown hacker or group of hackers.

It turns out that hackers managed to hijack a popular third-party accessibility plugin called "Browsealoud," used by all these affected websites, and injected their cryptocurrency-mining script into its code.

Browsealoud is a popular third-party browser plugin that helps blind and partially-sighted users access the web by converting site text to audio.

The script that was inserted into the compromised Browsealoud software belongs to CoinHive—a browser-based Monero mining service that offers website administrators to earn revenue by utilizing CPU resources of visitors.

The full list of affected websites can be found here.

After UK-based infosec consultant Scott Helme raised the alarm about this hack when one of his friends mentioned getting anti-virus alerts on a UK Government website, BrowseAloud's operator Texthelp took down its site to resolve the issue.

"In light of other recent cyber attacks all over the world, we have been preparing for such an incident for the last year. Our data security action plan was actioned straight away and was effective, the risk was mitigated for all customers within a period of four hours."

"Texthelp has in place continuously automated security tests for Browsealoud - these tests detected the modified file, and as a result, the product was taken offline."

This action eventually removed Browsealoud from all websites immediately, addressing the security issue without its customers having to take any action.

The company also assured that "no customer data has been accessed or lost," and that its customers will receive a further update as soon as the security investigation gets completed.