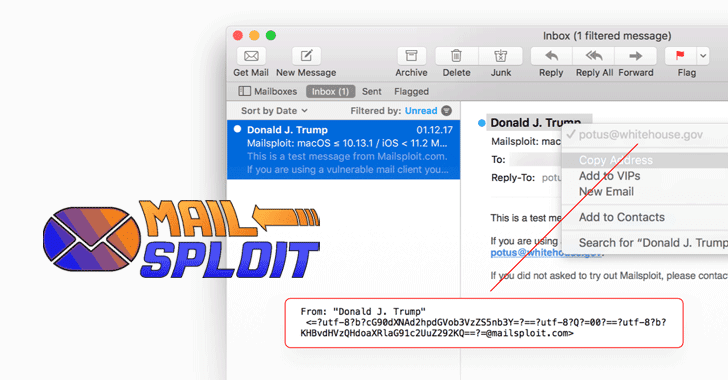 If you receive an email that looks like it's from one of your friends, just beware! It's possible that the email has been sent by someone else in an attempt to compromise your system.

A security researcher has discovered a collection of vulnerabilities in more than 30 popular email client applications that could allow anyone to send spoofed emails bypassing anti-spoofing mechanisms.

Although most of these affected email client applications have implemented anti-spoofing mechanisms, such as DKIM and DMARC, MailSploit takes advantage of the way email clients and web interfaces parse "From" header.

Email spoofing is an old-school technique, but it works well, allowing someone to modify email headers and send an email with the forged sender address to trick recipients into believing they are receiving that email from a specific person.
In a dedicated website went up today, Haddouche explained how the lack of input sanitization implemented by vulnerable email clients could lead to email spoofing attack—without actually exploiting any flaw in DMARC.

To demonstrate this attack, Haddouche created a payload by encoding non-ASCII characters inside the email headers, successfully sending a spoofed email from an official address belonging to President of the United States.

"Using a combination of control characters such as new lines or null-byte, it can result in hiding or removing the domain part of the original email," Haddouche says in his blog post.

"We've seen a lot of malware spreading via emails, relying on social engineering techniques to convince users to open unsafe attachments, or click on phishing links. The rise of ransomware distributed over email clearly demonstrates the effectivity of those mechanisms."

Besides spoofing, the researcher found some of the email clients, including Hushmail, Open Mailbox, Spark, and Airmail, are also vulnerable to cross-site scripting (XSS) vulnerabilities, which stems from the email spoofing issue.

Haddouche reported this spoofing bug to 33 different client applications, 8 of which have already patched this issue in their products before the public disclosure and 12 are on their way to fix it. 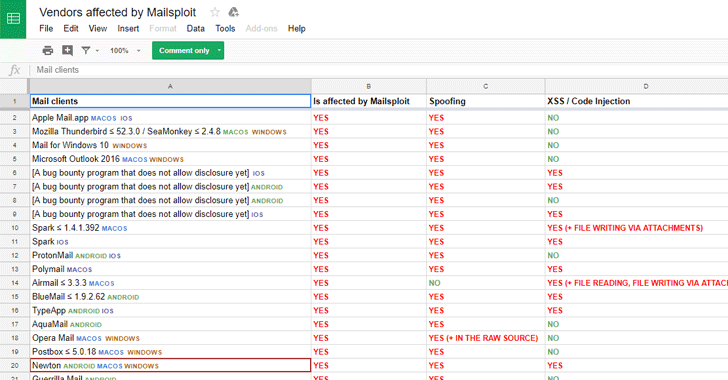 Here you can find the list of all email and web clients (both patched and unpatched) that are vulnerable to MailSploit attack.

However, Mozilla and Opera consider this bug to be a server-side issue and will not be releasing any patch. Mailbird closed the ticket without responding to the issue, while remaining 12 vendors did not yet comment on the researcher's report.