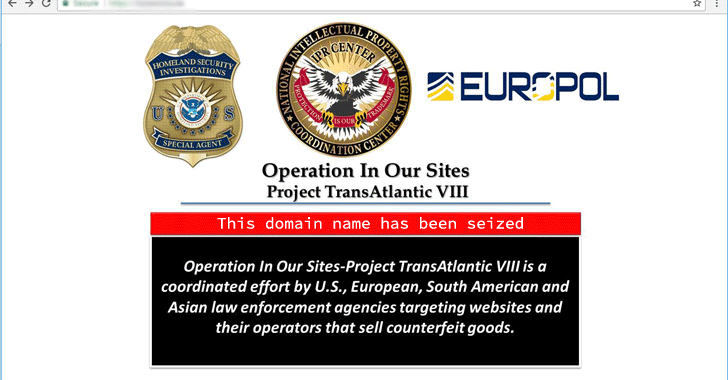 Counterfeiting is a form of trademark infringement that involves the manufacturing and/or distribution of fake lookalike branded products with a primary purpose to confuse or dupe consumers into buying them.

The operation, dubbed "In Our Sites (Project TransAtlantic VIII)," was conducted by Europol in association with the Interpol, the US National Intellectual Property Rights Coordination Centre (NIPRCC), FBI, Department of Justice (DOJ), and law enforcement authorities from 27 European Member States.

Counterfeit goods are a huge business, as the International Trademark Association suggested that around $460 billion worth of counterfeit goods were bought and sold last year alone.


"Targeting copyright-infringing websites that market dangerous counterfeit goods to consumers and engage in other forms of intellectual property theft will continue to be a priority for law enforcement," said acting IPR Center Director Nick.

"Strengthening our collaboration with police authorities around the world and leaders of industry will reinforce the crackdown on IP crimes, and demonstrate that there is no safe haven for criminals committing these illicit activities."

Europol has not yet disclosed names of seized domains in its press release, and a spokesperson told The Hacker News that the "participating countries have not allowed us [Europol] to release any of the names yet."

The seized domains have now been displaying the official seals from various law enforcement departments, along with a message that reads:

This domain name has been seized

Operation in Our Sites-Project TransAtlantic VIII is a coordinated effort by the U.S., European, South American and Asian law enforcement agencies targeting websites and their operations that sell counterfeit goods.

In their fight against the online trade of counterfeit goods, Europol has seized a total of 7,776 websites in previous "In Our Sites" (IOS) editions. IOS was implemented in 2014 and has since increased significantly.