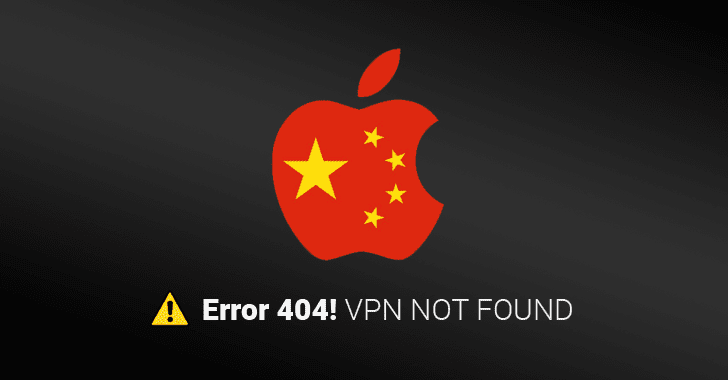 In order to comply with Chinese censorship law, Apple has started removing all virtual private network (VPN) apps from the App Store in China, making it harder for internet users to bypass its Great Firewall.

In a blog post, the developers of ExpressVPN reported that Apple informed them that their VPN app had been pulled from the company's Chinese App Store, and it seems all major VPN clients have received the same notice from Apple.

China has strict Internet censorship laws through the Great Firewall of China – the country's Golden Shield project that employs a variety of tricks to censor Internet and block access to major foreign websites in the country.

The Great Firewall is already blocking some 171 out of the world's 1,000 top websites, including Google, Facebook, Twitter, Dropbox, Tumblr, and The Pirate Bay in the country.

Therefore, to thwart these restrictions and access these websites, hundreds of millions of Chinese citizens use virtual private networks (VPNs) that encrypt their online traffic and route it through a distant connection.

However, earlier this year, China announced a crackdown on VPNs and proxy services in the country and made it mandatory for all VPN service providers and leased cable lines operators to have a license from the government to use such services.

This 14-month-long crackdown on the use of unsupervised internet connections, including VPNs was launched by the country's Ministry of Industry and Information Technology, who called it a "clean-up" of China's Internet connections.

Now, ExpressVPN received a notice from Apple that its app would be removed from the China-based App Store "because it includes content that is illegal in China."

"We're disappointed in this development, as it represents the most drastic measure the Chinese government has taken to block the use of VPNs to date, and we are troubled to see Apple aiding China's censorship efforts," ExpressVPN said in a statement.

"We are writing to notify you that your application will be removed from the China App Store because it includes content that is illegal in China," Apple said in the notice. "We know this stuff is complicated, but it is your responsibility to understand and make sure your app conforms with all local laws."

Although Apple did not comment on this issue, it is no coincidence, as the company has severely been implementing various aspects of Chinese law in recent months for its regional operations in the most populated country.

Earlier this year, Apple removed the New York Times (NYT) app from its Chinese App Store because the app was in "violation of local regulations."

The tech giant has even partnered with a local firm in the southwestern province of Guizhou earlier this month to set up its first data centre in China, which will store all user information for Chinese customers.