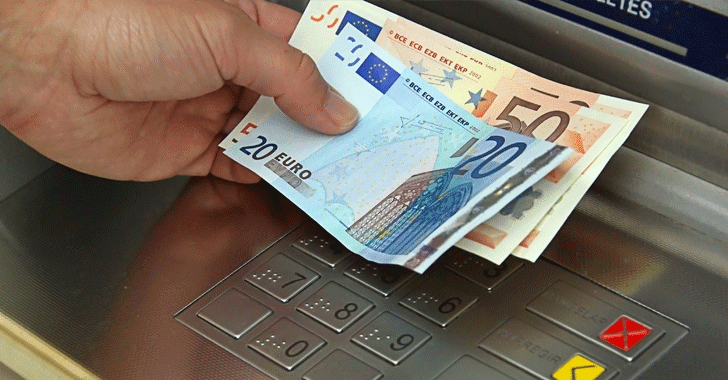 ATM hackers who long relied on tactics of stealing payment card numbers and online banking credentials to steal millions are now targeting the bank itself to steal cash directly from the machines.

Earlier this year, a gang of cyber criminals infected several ATMs with malware in Taiwan and Thailand that caused the machines to spit out millions in cash, and the gang members then stood in front of the infected ATMs at the appointed hour and collected the money.

Now, the FBI has warned U.S. banks of the potential for similar ATM jackpotting attacks, saying that the agency is "monitoring emerging reports indicating that well-resourced and organized malicious cyber actors have intentions to target the U.S. financial sector."

ATM jackpotting is a technique used to force automated teller machines to spit out cash.

According to Russian cyber security firm Group-IB, cyber crooks have remotely infected ATMs with malware in more than dozen countries across Europe this year, which forces machines to spit out cash.

The world's two largest ATM manufacturers, Diebold Nixdorf and NCR Corp., said they were aware of the ATM attacks and had already been working with their customers to mitigate the threat.

The cyber criminals have been targeting ATMs for at least five years, but the latest hacking campaigns mostly involved small numbers of ATMs due to the fact that hackers required physical access to the machines to collect cash.

Group-IB did not name the banks targeted in the campaign but said the victims were located in Armenia, Bulgaria, Estonia, Georgia, Belarus, Kyrgyzstan, Moldova, Spain, Poland, the Netherlands, Romania, the United Kingdom, Russia, and Malaysia.

Both Diebold Nixdorf and NCR said they had already provided banks with information on how to thwart the attack, Reuters reported.


"We have been working actively with customers, including those who have been impacted, as well as developing proactive security solutions and strategies to help prevent and minimize the impact of these attacks," said Owen Wild, NCR's global marketing director for enterprise fraud and security.

While Group-IB believes the attacks across Europe were conducted by a single criminal group, dubbed Cobalt, the FBI believes the malicious software used in the attack could be linked to the Russian ATM gang known as Buhtrap, the Wall Street Journal reported.

However, citing the tools and techniques used by both groups, Group-IB believes that Cobalt is linked to Buhtrap, which stole 1.8 Billion rubles ($28 Million) from Russian banks between August 2015 and January 2016.