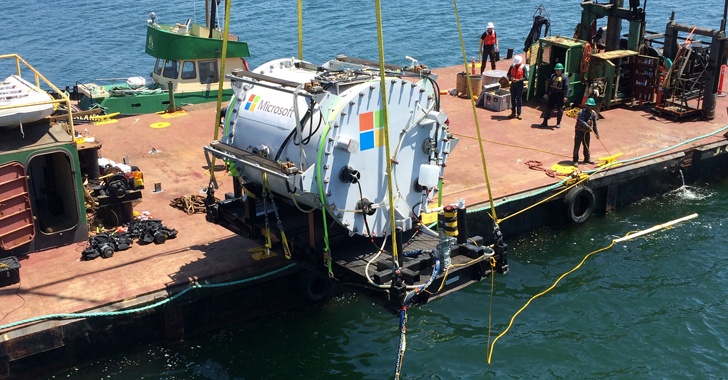 Where tech companies like Facebook and Google prefer to move their data centers to colder countries to reduce their air conditioning bill, Microsoft has come up with an even better home for data centers while cutting high energy costs for cooling them: Under the Sea.

Building massive data centers underwater might sound crazy, but it is exactly something Microsoft is testing with its first submarine data center, dubbed Leona Philpot.

The testing is part of Microsoft's plan dubbed Project Natick — an ongoing research project to build and run a data center that is submerged in the ocean, which the company believes, could make data centers faster, cost-effective, environmentally friendly and easier to set up.

Leona Philpot (named after the Halo character from Microsoft's Xbox) was tested last August, when engineers placed an enormous steel capsule a kilometer off the California coast, 30 feet underwater in the Pacific Ocean.

A single datacenter computing rack was placed in an eight-foot-wide steel capsule, which was covered in around 100 sensors to monitor every aspect of the underwater conditions: pressure, humidity, and, most importantly, motion.

The test ran from August to November last year (exactly 105 days) and the engineers said it was more successful than expected.

According to Microsoft, these are the main reasons for experimenting with underwater data centers:

1. Air conditioning cost is one of the biggest pain in running data centers. Traditional data centers are believed to consume up to 3 percent of the world's electricity.

So, placing the data centers in the ocean eliminated the need for cooling and will highly cut energy costs required to cool the heat generated by the racks upon racks of servers that process and store the world's digital lives.

2. Half of the world's population is located within 200 kilometers of the coast, so placing data centers in the sea would reduce latency – the time data takes to travel from its source to customers, which simply means faster delivery of data.

3. Reduce the time to build a data center from 2 Years to 90 Days. Microsoft believes that if it can mass produce the steel capsules, the company could build data centers in just 90 days.

This would make its operations cheaper and much quicker than the time needed to set a data center up on land.

Moreover, the capsules designed by the company would also adopt new, innovative rack designs that do not even need to consider human interaction.

4. Use of Renewable Energy. The project's engineers even believe that in future, underwater data centers might be able to power themselves by renewable energy, as in this case, perhaps underwater turbines or tidal power to generate electricity.

Data centers on land are open for IT engineers to fix issues and replace servers whenever required, but the company wants its undersea data centers to go without maintenance for years at a time.

Since Microsoft doesn't have a team of Scuba engineers, each Natick data center unit would operate for over 5 years without maintenance and then it would be dragged up to the surface to have its internal parts replaced.

Other obvious risks for submarine data centers could be saltwater that is corrosive and weather that can also be a problem, to name just two potential hurdles.

Future Of The Data Center

The company started working on this idea in 2013, but the development of a physical prototype began in 2014 and August last year with its first ever submarine data server, Leona Philpot.

It is not just Microsoft; many tech companies are considering new ways of housing data. In 2013, Facebook located one of its latest state-of-the-art data centers in Luleå, the far north of Sweden, to make use of cheap, renewable energy generated by hydroelectric schemes and outside air for cooling.