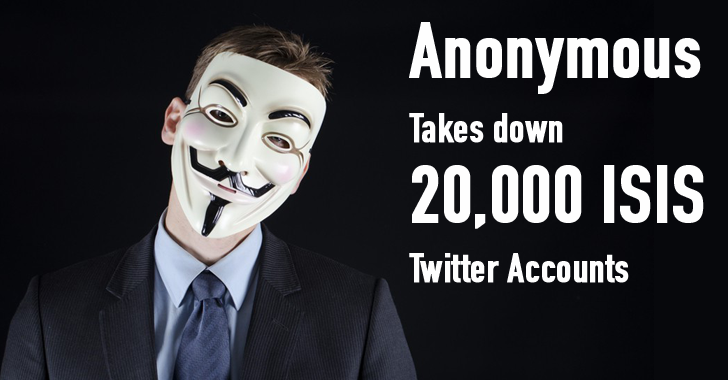 In the wake of horrific terror attacks in Paris, the online Hacktivist group Anonymous last week declared "total war" against the Islamic State militant group (ISIS) that claimed responsibility for the attacks.

While French, Russian, and US military are bombing ISIS from the sky, Anonymous members from all over the world are carrying out their very own cyber attack campaign, dubbed #OpParis, against the terrorist organization.

Anonymous has claimed to have taken down 20,000 ISIS-affiliated Twitter accounts in order to take revenge from ISIS for the deadly Paris attacks on November 13.

In a YouTube video posted on Wednesday, the group said:

"More than 20,000 Twitter accounts belonging to ISIS were taken down by Anonymous."

On Tuesday, the hacktivist group claimed to have successfully taken down more than 5,500 pro-ISIS Twitter accounts from the Internet.

Also Read: Check Out How 'Idiot' Anonymous Hackers Can Disrupt your Online Propaganda

In the latest video provided by Anonymous, a spokesman in black behind the group's signature Guy Fawkes mask said:

"Hello, citizens of the world. We are Anonymous. It is time to realize that social media is a solid platform for ISIS's communication as well as neutering their ideas of terror amongst youth. However, at the same time, social media has proved it is an advanced weapon. We must all work together and use social media to eliminate the accounts used by terrorists."

Hey ISIS! We Will Hunt you Down from The Internet

ISIS' most interesting aspect is how it leverages the enormous power of social media platform to radicalize young people, spread its message around the globe, recruit foreign supporters to its fight and shock people into taking notice of its actions.

So, taking down the ISIS' social media presence is the real key to defeating the terror group, and it does make an impact at worst.

"ISIS, we will hunt you and take down your sites, accounts, emails and expose you. From now on, there is no safe place for you online. You will be treated like a virus, and we are the cure," the spokesman said in the video message.

Last week, when Anonymous declared war against ISIS and warned it of launching their "biggest operation ever" against the terrorist group, ISIS militants called Anonymous – "IDIOTS".

However, on the other side, the terror organization started spreading instructions through its affiliated official channels on Telegram on how to prevent getting hacked by Anonymous. This shows that ISIS knows the capability of Anonymous.

In the past, hackers and organizations associated with Anonymous brought down websites allegedly connected with ISIS and took down thousands of ISIS accounts, disrupting their social media recruitment efforts.