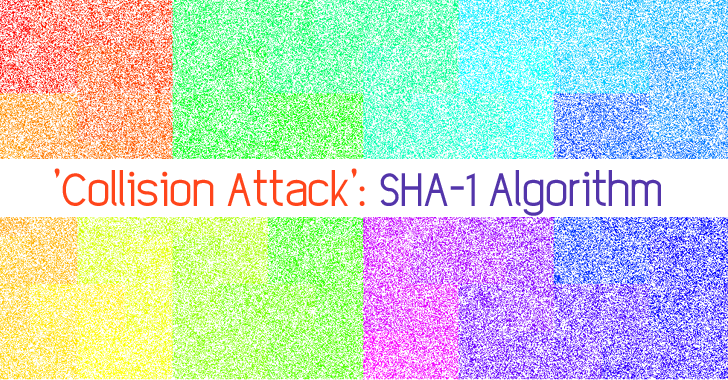 SHA-1 – one of the Internet's widely adopted cryptographic hash function – is Just about to Die.

Yes, the cost and time required to break the SHA1 algorithm have fallen much faster than previously expected.

According to a team of researchers, SHA-1 is so weak that it may be broken and compromised by hackers in the next three months.

The SHA-1 algorithm was designed in 1995 by the National Security Agency (NSA) as a part of the Digital Signature Algorithm. Like other hash functions, SHA-1 converts any input message to a long string of numbers and letters that serve as a cryptographic fingerprint for that message.

Like fingerprints, the resulting hashes are useful as long as they are unique. If two different message inputs generate the same hash (also known as a collision), it can open doors for real-world hackers to break into the security of banking transactions, software downloads, or any website communication.

Researchers from the Centrum Wiskunde & Informatica in the Netherlands, Inria in France, and Nanyang Technological University in Singapore have published a paper that showed that SHA-1 is vulnerable to the same collision attacks, which they dubbed – Freestart Collision.

Collision attacks appear when the same hash value (fingerprint) is produced for two different messages, which then can be exploited to forge digital signatures, allowing attackers to break communications encoded with SHA-1.

However, based on new research, such attacks could be performed this year for $75,000 to $120,000 – thanks to a new graphics-card technique known as "boomeranging" that finds SHA1 collisions.

"Our new GPU-based projections are now more accurate, and they are significant below Schneier's estimations," the research paper reads. "More worrying, they are theoretically already within Schneier estimated resources of criminal syndicates as of today, almost 2 years earlier than previously expected and 1 year before SHA-1 being marked as unsafe."

The published findings are theoretical and will not cause any immediate danger, but we strongly encourage administrators to migrate from SHA-1 to the secure SHA-2 or SHA-3 hash algorithms as soon as possible.

Administrators should consider the impact SHA-1 would have to their organization and plan for:
SHA-2 is developed by the NSA, whereas SHA-3 is developed by a group of independent researchers.