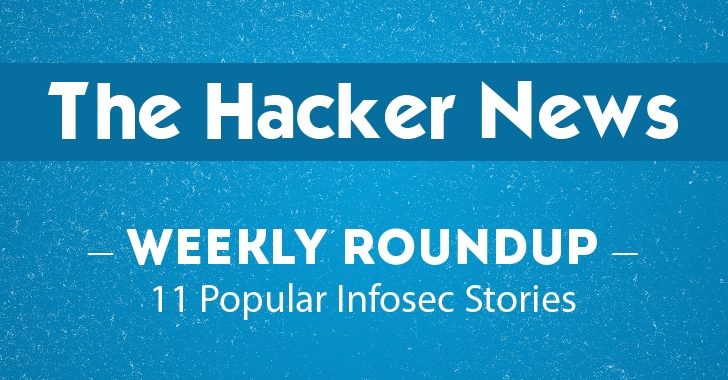 We are back with our last week's top cyber security threats and challenges, just in case you missed any of them (ICYMI).

THN Weekly Round Up is The Hacker News efforts to help you provide all important stories of last week in one shot.

We recommend you read the full story (just click 'Read More' because there's some valuable advice in there as well).

While the world is battling between Quantum computers and Encryption, the NIST Scientists have set a new record in the field of "Quantum Teleportation"...

…by successfully Teleporting a small amount of data (qubit) inside light particles over a distance of 60 Miles (100 km) through a network of optical fiber – the record which is four times faster than previous one.

To know how the Quantum Teleportation works and how the researchers able to reach this record, Read More…

Pirate Bay co-founder Gottfrid Svartholm Warg, also known as Anakata, has been released from a Sweden prison following 3 years behind bars for copyright and hacking offenses in both Sweden and Denmark.

The Pirate Bay is one of the world's most popular file-sharing websites predominantly used to share copyrighted material, like pirated software, pirated video files, and other stuff, free of charge.

For more information on Svartholm his release, Read More…

Microsoft finally responded to the growing privacy concerns around its newest operating system to regain the trust of users who are concerned about their online privacy related to Windows 10, But…

The company did admit that the operating system does regularly phone home by default.

According to the company, Windows 10 doesn't collect two types of data – communications (including e-mail and Skype) and File Contents – but the company collects everything else from Cortana and Bing searches to store purchases.

Once again the company surprised us by choosing Ubuntu as the operating system for their Cloud-based Big Data services.

A Very Big Number Indeed! A highly critical unpatched Zero-day vulnerability discovered in the latest version of WinRAR affected hundreds of Millions of its users worldwide.

The remote code execution vulnerability in the stable version of WinRAR 5.21 for Windows computers can be used by any attacker to insert a malicious HTML code inside the "Text to display in SFX window" section when the user is creating a new SFX file.

To know more about the zero-day flaw in WinRAR, Read More…

If you are among those privacy-conscious people who are still using 'no longer available' TrueCrypt Encryption Software, then it's time for you to move on.

Despite going through audits, researchers have found two highly critical security vulnerabilities in TrueCrypt that could expose your data to hackers if exploited.


For detailed information on both the vulnerabilities, Read More…

7. One Billion Android Users are at Risk of Stagefright Bug 2.0

This time, the bug allows attackers to hack your Android smartphones just by tricking you into visiting a website that contains a malicious multimedia file, either MP3 or MP4.

This was one of the last week's trending news. Amazon employee Sanmay Ved, who was an ex-Google employee, managed to buy the world's largest search engine website Google.com just for $12 from Google itself.

However, soon Ved received an order cancelation email and refund from Google Domains, but the experience of owning the search engine giant for one whole minute indeed sounds great.

For detail information and screenshots, he took while purchasing Google.com, Read More…

This week, we saw 3 high-profile data breaches, compromising personal and sensitive details of millions of people.
T-Mobile's credit application processor Experian was hacked, potentially exposing highly sensitive details of 15 Million users who applied for its service in the past two years.

In Patreon's case, hackers managed to steal almost 15 gigabytes' worth of data including names, shipping addresses and email addresses of 2.3 Million users, and then made it available to various online locations for anyone to download.

US brokerage firm Scottrade also suffered a massive data breach in which hackers managed to access one of its servers in late 2013 and early 2014, stealing names and street addresses for 4.6 million of their clients.

Researchers have discovered a method that can be used to hack and hijack Unmanned Aerial Vehicles (UAVs), better known as DRONES.

HP Security Researcher Oleg Petrovsky discovered design flaws in the UAV systems that allowed him to capture, modify, and inject a data stream into a telemetry link connection over a serial port, as well as spoof the connection to the ground station to take complete control of Drone.

11. AdBlock Extension has been Sold to an 'Unknown Buyer'

Yes, your favorite AdBlock browser extension that helps you block annoying online advertising has been sold – and more shockingly – to an unknown buyer.

What's more bothering is that the 'Anonymous buyer' is turning ON the "Acceptable Ads" feature, which maintains a whitelist of advertisements that are not blocked by default.

This means that AdBlock will now let some advertisements through on by selected websites or by selected companies by default, if those companies pay for showing their ads – the concept entirely contradict the key feature of AdBlock, i.e. blocking ads.