Is China Behind the Massive Data Theft of 4 Million U.S. Officials? 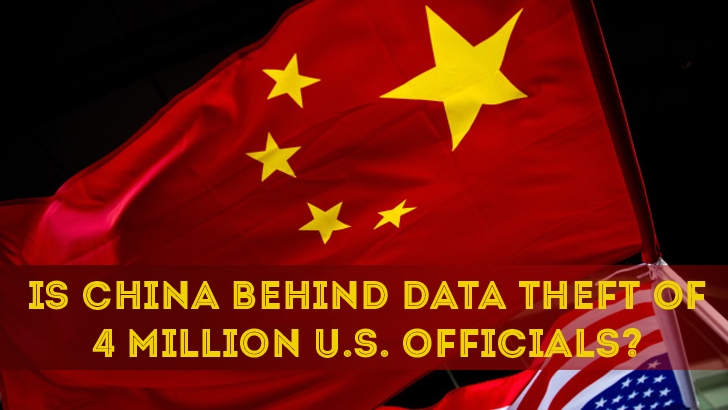 The US federal agency has notified its 4 Million current and former government employees that their private data has been compromised in a massive data breach.

Hackers managed to break into US government computer systems in the Office of Personnel Management (OPM) and steal records of Millions of employees, making it one of the largest known breaches of information ever on federal workers.

Biggest Data Breach in US History

However, China has denied any involvement in what could be the largest cyber-attack in US history by calling such claims "irresponsible".

"Cyber attacks are generally anonymous and conducted across borders, and their origins are hard to trace," said Hong Lei, a foreign ministry spokesman. "Not to carry out deep investigation and keep using words such as 'possible' is irresponsible and unscientific."

The Federal Bureau of Investigation (FBI) has been working with OPM interagency partners to investigate the matter. Meanwhile, OPM assured its users that it is taking all potential threats seriously, and will hold accountable those who are behind the attack.

OPM said it became aware of the data breach in April this year when it detected new malicious activity affecting its cyber security systems.

However at the beginning of last month, the Department of Homeland Security concluded that the agency's personal data had been compromised in the 'massive breach', and about 4 million government officials may have been affected.

OPM said it would contact and inform all those individuals whose personal data may have been stolen to "monitor [their] financial account statements and immediately report any suspicious or unusual activity to financial institutions."

OPM is also offering 18 months of free credit monitoring and identity theft insurance to all those are affected by the breach.

According to many United States officials who requested anonymity, the criminal hackers were believed to have been based in China. However, it is yet unclear if there is any involvement of the Chinese government.

The FBI and the Department of Homeland Security are investigating the breach.