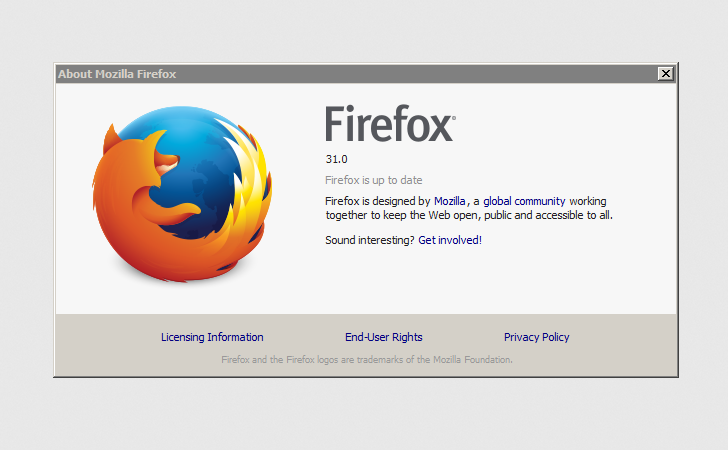 Mozilla has officially released its latest build Firefox 31 for all supported platforms, addressing 11 vulnerabilities in total, three of which are marked critical that could have been exploited by hackers to mount remote code execution attacks.

Mozilla Firefox recommends its users to install the security update as soon as possible, warning that the three critical vulnerabilities discovered in its browser could be exploited by attackers and leverage them to "run attacker code and install software, requiring no user interaction beyond normal browsing".

CRITICAL VULNERABILITIES
The three major vulnerabilities are as follows:

"Some of these bugs showed evidence of memory corruption under certain circumstances, and we presume that with enough effort at least some of these could be exploited to run arbitrary code," Mozilla wrote.

OTHER SECURITY VULNERABILITIES
Mozilla also addresses two high rated vulnerabilities that cause a potential danger, as they could be used by an attacker to fetch users' personal and sensitive information from other websites they visit or inject malicious code into those websites to infect users.

Moreover, the security issues fixed in the latest revision of Firefox mostly refer to use-after-free vulnerabilities, in Web Audio, with the FireOnStateChange event and when manipulating certificates in the trusted cache.

Also, to provide more security to its customers, the company has announced a protection mechanism against malicious downloads in its latest build. The feature relies on the Safe Browsing API from Google and leverages application reputation information to detect malware in file downloads.

The protection mechanism consists in verifying the metadata, such as download URL, SHA-256 hash, details about the certificate, belonging to the item requested by the user, and comparing it to a given block list.

Based on a local list of files and remote one, the verification of the metadata is carried out. If a match is found the file is not saved to disk. On the other hand, when files are signed, they are matched from a given whitelist, and the binary is marked as trusted and as a result of it, the remote check is no longer performed.

Additionally, a new SSL/TLS certificate verification is now available on Firefox latest build 31 that uses a more powerful and easier to maintain "mozilla::pkix" library. No doubt this change would go unnoticed by the regular user, but it would protect its users from the compatibility issues arose for websites that do not use an authorized certificate accepted in the Mozilla CA Program.