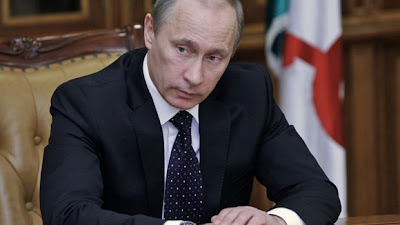 Russian President Vladimir Putin bluntly rejected U.S. pleas to extradite National Security Agency Whistleblower Edward Snowden on Tuesday, says since Snowden has not committed a crime in that country, the government will not extradite him back.

Putin said, "Mr. Snowden is a free man," Snowden did not cross the Russian border, implying that he is still in the Moscow airport's transit zone, a sort of diplomatic neutral space. "He arrived as a transit passenger – he didn't need a visa, or other documents," Putin said.

After arriving Sunday on a flight from Hong Kong, Snowden booked a seat on a Havana-bound flight from Moscow on Monday en route to Venezuela and then possible asylum in Ecuador, but he didn't board the plane. "The sooner he selects his final destination point, the better both for us and for himself," Putin said.
White House Press Secretary Jay Carney on Monday urged Russia to ultimately turn him over. "We do expect the Russian government to look at all the options available ... to expel Mr. Snowden back to the United States," Carney said.

Commenting on a U.S. request to extradite him, Putin said that Russia doesn't have an extradition agreement with the U.S. and thus wouldn't meet the U.S. request. But he also said Russian security forces have not been working with Snowden and expressed hope that the incident would not "affect the cordial nature of our relations with the U.S."

Mr. Snowden has been charged with violating American espionage laws by revealing secret information on intelligence-gathering.

Putin compared Snowden to WikiLeaks founder, Julian Assange, who has been provided asylum in the Ecuadorean Embassy in London, saying that both men were labeled criminals but consider themselves rights activists and champions of freedom of information.

"Ask yourself a question: should people like that be extradited so that they put them in prison or not?" he said.