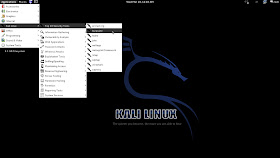 BackTrack Linux, a specialized distribution of penetration testing tools, has long been a favorite of security specialists and IT pros.

Security professionals have been relying on the BackTrack security distribution for many years to help them perform their assessments. A couple of weeks ago, futuristic major release of BackTrack was announced as Kali Linux.


Today Backtrack team released few updates to Kali Linux as version 1.0.3 and fixed couple of bugs. "Our first attempts at building an accessible version of Kali failed and after a bit of digging, we found that there were several upstream GNOME Display Manager (GDM3) bugs in Debian, which prevented these accessibility features from functioning with the GDM greeter. Working together with an upstream GNOME developer, we knocked out these bugs and had the fixes implemeted in Kali, and hopefully in future builds of GDM3 in Debian."