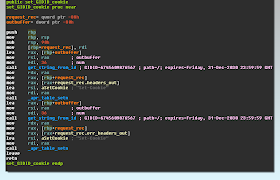 Dubbed Linux/Cdorked.A, one of the most sophisticated Apache backdoors we have seen so far. The backdoor leaves no traces of compromised hosts on the hard drive other than its modified httpd binary, thereby complicating forensics analysis. All of the information related to the backdoor is stored in shared memory.

The configuration is pushed by the attacker through obfuscated HTTP requests that aren't logged in normal Apache logs. The HTTP server is equipped with a reverse connect backdoor that can be triggered via a special HTTP GET request. This means that no command and control information is stored anywhere on the system.

ESET researchers analyzed the binary and discovered a nasty hidden backdoor. In the Linux/Cdorked binary all the important or suspicious strings are encrypted and analysed version contains a total of 70 strings that are encoded this way.

When attackers get full root access to the server, they can do anything they want. From modifying configurations, to injecting modules and replacing binaries.