August 26, 2012Mohit Kumar
Anonymous Operation #OpColtan have announced another attack in the name of this operation and this time its on a Manufacturer and Supplierof Electronic Components AVX Corporation (www.avx.com). AVX It's a big firm wich produce ceramic and tantalum capacitors, connectors, thick and thin film capacitors, resistors and integrated passive components.
UN accused AVX, and many other firms to be interested in illegal coltan extraction and war in DRC. According to Hackers "Usually Coltan was stealed by war groups from Congo mines and carried out to the firms.Million of people lost their lives in Congo war, nature was destroied in order to dig coltan and a lots of gorillas were killed.Unfortunatelly UN decided to abandon the case and never punish the responsibles of the war an nature devastation."
"AVX and other involved firms published an ethical code in 2010; they claim that they don't get tantalium from war areas.NOW a new civil war is growing up in Congo and is totally hypocrite to share DRC in different areas in order to say that some of these are war free.AVX, UN trial refused to punish you, but operationgreenrights doesn't forget." 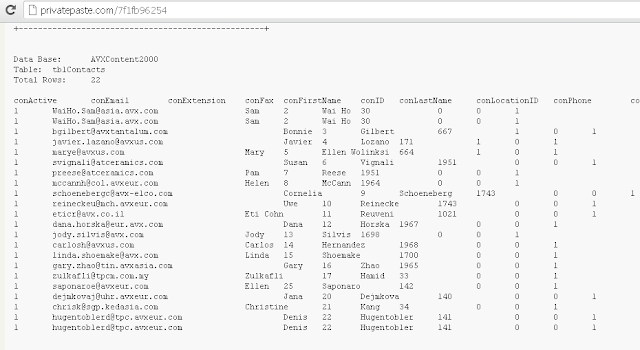 Hackers found SQL injection bug on the site and exploit it to extract database, finally they expose it on internet. The leak contains full database information of 2900 of the sites clients details with usernames, emails and other personal information as well as passwords which are encrypted.
"We ask for a new trial by the UN in order to invesitgate AVX's activities and other major companies in the DRC and in other war areas. Naturally, the bad working conditions of miners and the respect for the ecosystem should be investigated. At the moment, Anonymous #Operationgreenrights continues in its effort to sort out the truth about the illegal ore trade.
We are Anonymous.
We are legion.
We don't forget.
We don't forgive.
Except us!"