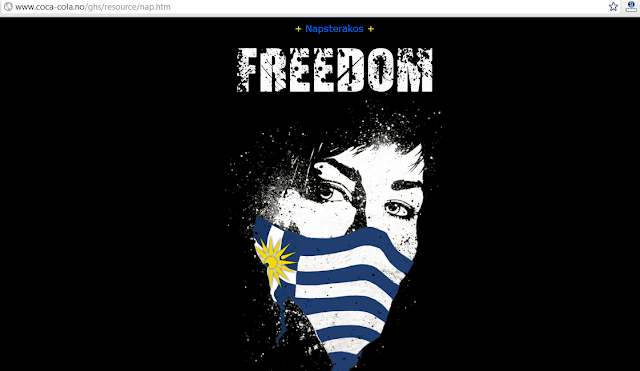 An Impressive cyberattack was executed by a ​​Greek hacker against the official website of the multinational company Coca-Cola in Norway with defacement in internal links of the website. In a demonstration of power, the Greek hacker with the pseudonym «Napsterakos», identified weakness in the company's website-giant Coca-Cola, and defaced on purpose to post his own messages.
As SecNews was informed by an anonymous reader giving us details about the incident, the attack was made as the first attack of the operation «Greek Hacking Scene vs Corruption», The hacker «Napsterakos», in a message posted on Pastebin states that "when the future is based on lies, then everyone is corrupt ..." and that "~ We were everywhere we see and hear everything in a future based on lies anyone is corrupted, all must pay, and will do so in one way or another. The words acquire value only through their actions. ~ '
See [here] the message posted on the Pastebin and we give a relevant Screenshot. 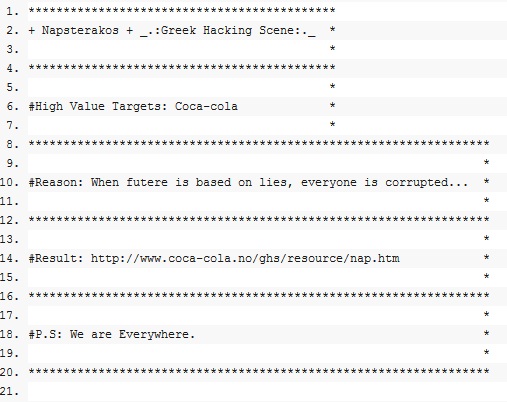 The Coca-Cola Norway was founded in 1997 and is the largest supply of soft drinks in Norway, responsible for production, sale and distribution of products. They are wholly owned by the parent company Coca-Cola Enterprises, and with strong partnerships and agreements for bottling and distribution of products such as beer, mineral water and a host of local beverages. It has even one of the largest logistics center in Norway.
Important is the fact that the website that was attacked, as expected, have taken important security measures by the company giant.As identified by the technical team of SecNews, they used Akamai's infrastructure to achieve the security and high availability access to their Web content. But it seems that this was not enough to stop the Greek hacker, who successfully implemented his defacement attacks