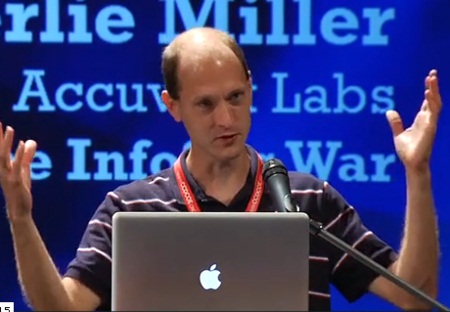 Charlie Miller is a former hacker who has become an information security consultant now working with Department of Defense (DoD) for helping out with cyber security.

He was invited to the conference on cyber conflict held by the NATO Cooperative Cyber Defense Center of Excellence in Tallinn, where he talked about the vulnerability of information systems.

In a recent video released he talks about the ways he works.

He spent five years working for the National Security Agency. Miller demonstrated his hacks publicly on products manufactured by Apple. In 2008 he won a $10,000 cash prize at the hacker conference Pwn2Own in Vancouver Canada for being the first to find a critical bug in the ultrathin MacBook Air.

The next year, he won $5,000 for cracking Safari. In 2009 he also demonstrated an SMS processing vulnerability that allowed for complete compromise of the Apple iPhone and denial-of-service attacks on other phones.

In 2011 he found a security hole in an iPhone's or iPad's security, whereby an application can contact a remote computer to download new unapproved software that can execute any command that could steal personal data or otherwise using IOS application functions for malicious purposes. As a proof of concept, Miller created an application called Instastock that got approved by Apple's App Store. He then informed Apple about the security hole, who then promptly expelled him from the App Store.