#OccupyLondon : The Night of Thousand Masks on 5th November 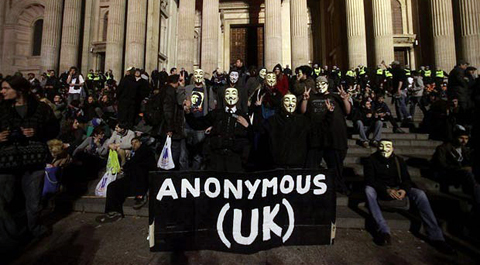 Anonymous Mask = "A symbol that unites them behind one universal message" . Activists plan to protest on 5th November ,2011 at Saint Pauls Cathedral London 9:00pm - 11:00pm. This going to be "The Night of Thousand Masks".

Message By Anonymous :
Good evening, London. Allow me first to apologize for this interruption. I do, like many of you, appreciate the comforts of every day routine- the security of the familiar, the tranquility of repetition. I enjoy them as much as any bloke. But in the spirit of commemoration, thereby those important events of the past usually associated with someone's death or the end of some awful bloody struggle, a celebration of a nice holiday, I thought we could mark this November the 5th, a day that is sadly no longer remembered, by taking some time out of our daily lives to sit down and have a little chat. There are of course those who do not want us to speak. I suspect even now, orders are being shouted into telephones, and men with guns will soon be on their way. Why? Because while the truncheon may be used in lieu of conversation, words will always retain their power. Words offer the means to meaning, and for those who will listen, the enunciation of truth. And the truth is, there is something terribly wrong with this country, isn't there? Cruelty and injustice, intolerance and oppression. And where once you had the freedom to object, to think and speak as you saw fit, you now have censors and systems of surveillance coercing your conformity and soliciting your submission. How did this happen? Who's to blame? Well certainly there are those more responsible than others, and they will be held accountable, but again truth be told, if you're looking for the guilty, you need only look into a mirror. I know why you did it. I know you were afraid. Who wouldn't be? War, terror, disease. There were a myriad of problems which conspired to corrupt your reason and rob you of your common sense. Fear got the best of you, and in your panic you turned to the now high chancellor, Adam Sutler. He promised you order, he promised you peace, and all he demanded in return was your silent, obedient consent. Last night I sought to end that silence. Last night I destroyed the Old Bailey, to remind this country of what it has forgotten. More than four hundred years ago a great citizen wished to embed the fifth of November forever in our memory. His hope was to remind the world that fairness, justice, and freedom are more than words, they are perspectives. So if you've seen nothing, if the crimes of this government remain unknown to you then I would suggest you allow the fifth of November to pass unmarked. But if you see what I see, if you feel as I feel, and if you would seek as I seek, then I ask you to stand beside me one year from tonight, outside the gates of Parliament, and together we shall give them a fifth of November that shall never, ever be forgot. V for Vendetta.