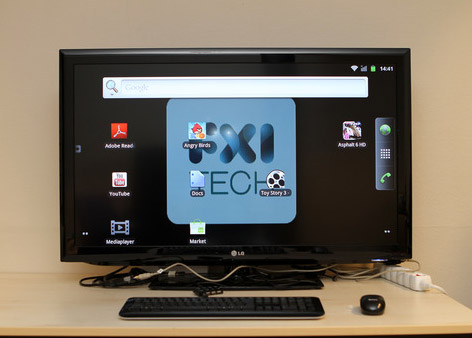 Norwegian company FXI Technologies has been showing a USB stick-sized portable computer prototype, featuring with a dual-core 1.2-GHz CPU, 802.11n Wi-Fi, Bluetooth, HDMI-out and a microSD card slot for memory.
Codenamed Cotton Candy because its 21 gram weight is the same as a bag of the confection, the tiny PC enables what its inventor calls "Any Screen Computing," the ability to turn any TV, laptop, phone, tablet, or set-top box into a dumb terminal for its Android operating system.
The Cotton Candy has a USB 2.0 connector on one end and an HDMI jack on the other. When connected to an HDTV, it uses the HDMI port for video, the USB for power, and Bluetooth to connect to a keyboard, mouse, or tablet for controlling the operating system. The device can output up to 1080p so even a full HD screen can display the Candy's preloaded Android 2.3 operating system at its native resolution. The dual core CPU can even play local 1080p video or stream HD clips from the internet.

The idea behind it is similar to that of FXI's Cotton Candy, in the sense that you will need to boot Android from a USB stick. Alternatively you could use an SD card as well. They've managed to get just about everything up and running, including Android Market, but it seems that the majority of users who managed to get this running successfully have been owners of ASUS branded PCs, although we can't be sure of the reason behind that particular phenomenon.
For more information about the Android-x86 project, or if you're looking for a way to load up Android's Honeycomb 3.2 onto your laptop or PC, head on down to Android-x86's website for the details. In the meantime you can check out this guy who managed to load Honeycomb 3.2 onto his ASUS Eee PC.
From developers to students to mobile workers, there are a number of groups that could find innovative ways to use a computer the size of a USB stick. However, you won't see a consumer product shipping anytime soon from FXI. The company plans to sell the Cotton Candy to developers and let OEMs license the technology and turn it into something that can appeal to a wide audience.