Bizztrust : The Most Secure Android Phone 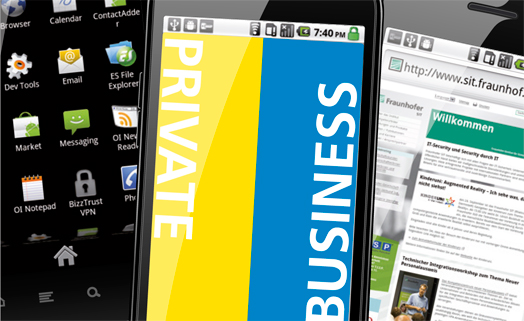 With companies these days justifiably concerned about the security of the mobile devices provided to their workforce, many workers find themselves carrying around two mobile phones - one for personal use and another for business. Sure, mobile phones aren't the huge pocket-stretching devices they once were but for the sake of convenience, one is most definitely better than two.
A new German project makes Android phones significantly more secure for business communications--this could change the way people use smartphones, entirely.The Germans are an efficient lot, and when it comes the quality of their automobiles, well Mercedes Benz, BMW and Audi says it all, don't they? The Swedish are also in with a shout for the safest car in the market, but when it comes to having the world's most secure Android-powered phone, the Germans have it down pat after discovering a method to develop super-secure virtual "work phones" on Android-powered devices.
A version of Android called BizzTrust creates two partitions in Android--one for personal use and another super-secure one for business. The new product has the potential to create headaches for Research In Motion (RIM), which uses security as a major selling point for BlackBerrys.
Features
This allows users to install all the potentially dangerous apps they like on the personal partition, while protecting access to business apps and data stored on the other partition. Even if attackers manage to infiltrate an unsecured app, they cannot use it to access company data, and the impact of the attack is confined to the private data on the smartphone.Users are able to switch between work and home functions with two clicks of the touchscreen while a color symbol lets users know whether they're in the business (red) or personal (green) area.
The modified Android software will debut on Tuesday, October 11 at the it-sa computer security show in Germany. Bizztrust is the end result of a joint effort by the Fraunhofer trade group and the Center for Advanced Security Research Darmstadt (CASED).According to CASED's Ahmad-Reza Sadeghi, the Android mod "significantly improves the security of today's mobile terminals at no cost to user-friendliness." Users toggle between their work and personal virtual phones by playing with a touchscreen slider; non-secure personal applications can be installed to their heart's content.
That approach may be convenient to workers, but their interests and those of an IT department can differ. Most employees would likely prefer unlimited use of their smartphones, installing and using whatever programs they like even though that can open the door to hackers seeking to attack a business.