#Anonymous : Now is the Time to evolve or Die 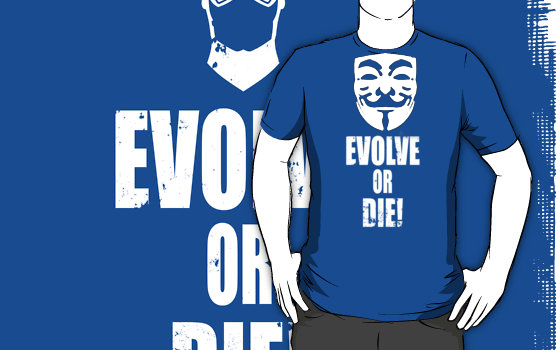 Anonymous was formed and birthed on the internet message board 4chan in 2003. The moniker Anonymous was derived as homage to 4chan. At the time, if someone posted to 4chan's forums and no name was given then the post was credited to "Anonymous". Seizing onto the premise or the idea that actions can be taken anonymously by the lesser or powerless "Anonymous" moved beyond 4Chan and morphed into sometime larger and more potent. The original premise of "Anonymous" appeared to be a limited but noble idea; attempting to keep the internet open and free because governments and corporations were earnestly trying and demanding limits and restrictions to the freedom of expression on the internet.
To date "Anonymous" has remained a banner that many channers, as well as hacktivists and IRC users, post under and are loosely grouped together. Allied under the umbrella of "Anonymous" with no real command structure in the group, "Anonymous" remains an ever fluctuating mass of unknown identities that have often fancied themselves as cyber-avengers unfocused and more often than not unable to remain of the same consciousness even on an hourly basis.
History must be remembered and never forgotten, for the factual words of Italian fascist Benito Mussolini was stated correctly; "Fascism is Corporatism".
As the gap in wages world wide become increasingly more disparaging a significantly increasing numbers of world citizens are being harmed and maltreated by the unquenchable greed and corruption of the evolving corporate state. As the wealth of the world has rapidly been consolidated into the hands of a small minority, governments are being bought and paid for and rapidly, one by one, turned over lock stock and barrel to faceless Corporations. These greed drive soulless concerns have not hesitated to use their power as an instrument of war as a means of increasing their power and profits. Sadly, as expected along with this ever grown trend it has become a fact that human rights violations are becoming even more extreme and cruel.
Since it is evident that the monstrous Corporations committing these unspeakable crimes are almost never held accountable, it is time that the young and the computer literate around the world educate themselves and become consciously aware which greedy Corporations are committing the horrendous crimes that effects the very survival of this planet and every living being on it. Because information is power, inform yourselves. Now is the time to educate yourselves and make your lists of these offenders!
By becoming more educated and informed on the global threat posed by corporations, is it possible that this idea, this premise of "Anonymous" could be channeled into the kind of tool needed to awaken global consciousness to the treachery of the global power structure. Could the true center of "Anonymous" that idea that "Anonymous" wishes to represent the truth to the world morph once more beyond its present form and limitations or will the nebulous vision behind the premise of "Anonymous" remain content to use their collective abilities for either good or bad simply content on a myopic and undisciplined path, depending on the inclination of the mob?
It is time to get off that fluffy cloud of illusion, get educated and get informed beyond such a small focus. Investigate the bigger picture, know your own power; inform others of the immediate threat of corporations and the growing take over of world governments, the biggest and baddest being taken over by fascism today is the United States of America. Internet freedom is the least of your worries now. Call it what you will, this is what Benito Mussolini correctly labeled Fascism my brothers. If you don't like it, you can oppose it. But if you ignore it and deny it; then you will remain a sitting target. "Now is the time to evolve or die"