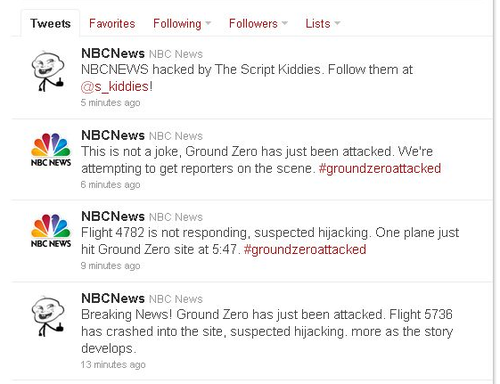 Hackers have broken into the Twitter account of NBC News and posted messages claiming that there has been a terrorist attack at Ground Zero in New York. Coming two days before the tenth anniversary of the 9/11 attacks, the prank by a group calling themselves the 'script kiddies' was greeted with widespread opprobrium from other twitter users.
"Breaking News! Ground Zero has just been attacked. Flight 5736 has crashed into the site, suspected hijacking. More as the story develops," was the first tweet this afternoon. It was followed by two others, including one that started "This is not a joke." The fourth tweet said "NBCNEWS hacked by The Script Kiddies."
Luke Russert, who covers politics for NBC News, also tweeted: "Please ignore NOT TRUE tweets coming from @NBCNews. We got hacked by tasteless despicable attention seeking criminals." Some experts suspect that script kiddies, who are thought to have hacked a Fox News account two weeks ago, are British although this had not been confirmed.