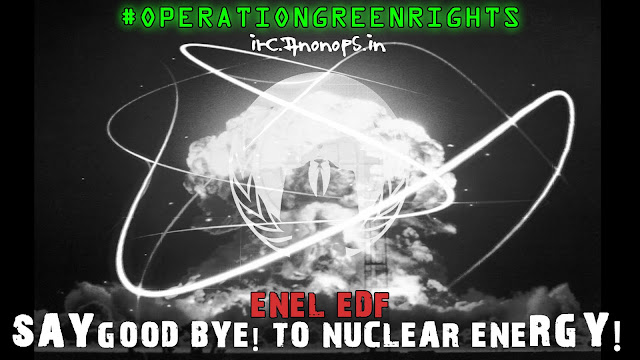 Early in July, Anonymous said it planned to attack oil firms and banks supporting the controversial extraction of oil from sand in Alberta, Canada. Exxon Mobil, ConocoPhillips, Canadian Oil Sands, Imperial Oil, and the Royal Bank of Scotland have been put on notice that they are likely to be targeted in Anonymous' latest operation, dubbed Project Tarmageddon.
Complete Press Release :
Early in July, deep below the radar of the Tar Sands Oil Industry, Anonymous and GreenSec boarded the LulzSub and began a journey of environmental justice. This journey had only one endpoint: success. With all the attention Anonymous recently had received , a sub was the sure choice to ensure maximum impact and minimum damage to the fleet. When Big Brother watches, you go under the surface.


All July, we supported a protest against the Tar Sands oil industry, which ended in protesters dancing on the meeting table of the Governor of Montana. We networked like ants in the internets to get word out about this civil disobedience, and about the issue at hand. Anonymous, the world's greatest think tank, then spent weeks researching the corporations involved, uncovering mountains of email addresses and contact info for employees who work to destroy our planet for profit.


Anonymous then brought the LulzSub to the surface for air and snacks. We immediately caught wind of Tar Sands industry representatives creating fake Twitter and Facebook profiles to spread false enthusiasm about the proposed Keystone XL pipeline, we created an Orinoco Flow of facts and links, sustaining a week-long information campaign. We widely spread word of the upcoming Washington D.C. protests, where now, over 850 people have been arrested at the White House for peaceful sit-ins. By mirroring the actions of these "astroturfers" we hoped to provide a true counterpoint to the artificial hurrahs of the fake accounts.


Our beautiful journey has manifested into a full-on conquest to expose the corruption in the companies who plan to mine this oil and build the Keystone XL pipeline from Canada to the Gulf of Mexico. We will be releasing the ballast of hundreds of corporate emails that we have obtained from the servers of oil industry websites. We encourage people to write personal letters to these people, telling them what you think. The mailservers of Transcanada have been down for two days, and we will continue that fine tradition, hoping to show the world that business as usual stops when the security of the environment is concerned.


The recent release of Wikileaks cables put more raw crude in the tank of the LulzSub, as we continued our voyage. We have found cables that directly prove that Statoil corporation, a major player in the Tar Sands industry, has fired workers in Venezuela for their political leanings, in collusion with state-owned petroleum company PDVSA. Another cable shows that Statoil was paid far more in a compensation package from PDVSA than was reported in the press. Another quotes Canadian Environmental Minister Prentice in saying he is deeply concerned with the effect of the Tar Sands on the image of Canada. We are unearthing much in our deep-sea voyage


We stand in solidarity with the almost 900 brave and civil protesters who have been arrested in front of Obama's temporary home, the indigenous people of Canada, environmental groups around the world, and those of you who dream of new energy sources and a healthier environment.


Anonymous and GreenSec invite you to join us on our IRC Saturday September third, as we launch our own form of sit-in. We will join together to shut down the websites of Tar Sands corporations and oil lobbying firms. This is a non-violent form of dissent that, for us, waves a flag to others, saying "Here. Here is the problem".


As billionaires wage a war on the environment, Anonymous stands up with donated time and energy to make a stance before our chance is over. No one can be allowed to sacrifice the air, water, forests, and the health of world citizens for profit. The Earth is worth more than the organic matter we exploit from it. As the protest in Washington D.C. comes to its end, we shall step up and do our part.


There are many unknowns in the climate issue, many things yet to be understood. As for corporate corruption and the destruction of the natural environment in the pursuit of profit, it is everywhere, and that is well understood. Help us stop it.


Saturday, September Third, HIGH NOON Alberta time (GMT -5)
Join us at irc.power2all.com port 6667 channel #OperationGreenRights
Get involved one way or another, but get involved.
Follow @OpGreenRights


Statoil recieves far larger compensatory payment from Venezuelan State-owned petroleum company for "its lost equity in the Sincor strategic association". Fallout from firings and Public lies from the Energy Minister of Venezuela regarding the payment.
https://pastebin.com/9bAKwNBq and https://pastebin.com/ZSMkk8cM


Canadian Environmental Minister Prentice says "he would step in and regulate the sands if Canada/'s [sic] image in the world gets further tarnished by negative coverage."
https://pastebin.com/dqqMcu51
Corporate and company Emails:
https://pastebin.com/P8vxZHrx
Dedicated to the Aboriginal People of North America in their struggle.