#OpFacebook : Facebook will be down on November 5 by Anonymous Hackers Attack

Aug 10, 2011Mohit Kumar
#OpFacebook : Facebook will be down on November 5 by Anonymous Hackers Attack 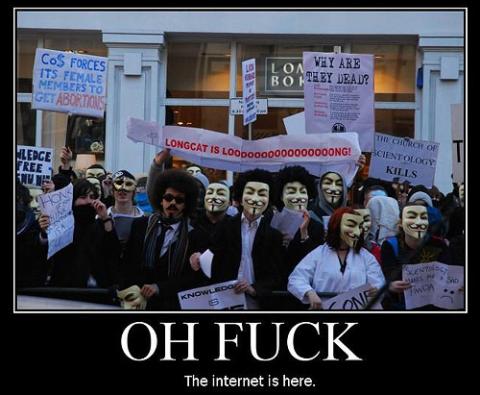 
In a YouTube video, the hacking group warns, "Your medium of communication you all so dearly adore will be destroyed." "If you are a willing hacktivist or a guy who just wants to protect the freedom of information then join the cause and kill Facebook for the sake of your own privacy."

The group said in its message that "Operation Facebook" would be begin November 5. It claimed the social network, based in Palo Alto,Calif., provides information to "government agencies" so they can "spy on people." If Operation Facebook is real, it could mark a new phase for Anonymous, which in recent weeks has joined forces with the remnants of the more tightly knit hacker group LulzSec to target law enforcement agencies in an ongoing operation called Antisec.

UPDATE :
Whereas one of the Anonymous Leader Claim that "Operation Facebook" is Fake. He tweeted as shown below. 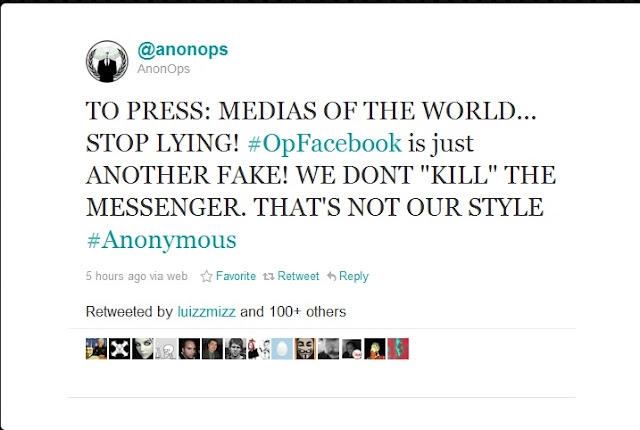 Press Release of Operation Facebook :
Here's the Anonymous press release and accompanying video message:
Operation Facebook
DATE: November 5, 2011.
TARGET: https://facebook.com
Press:
Twitter : https://twitter.com/OP_Facebook
https://piratepad.net/YCPcpwrl09
Irc.Anonops.Li #OpFaceBook
Message:
Attention citizens of the world,
We wish to get your attention, hoping you heed the warnings as follows:
Your medium of communication you all so dearly adore will be destroyed. If you are a willing hacktivist or a guy who just wants to protect the freedom of information then join the cause and kill facebook for the sake of your own privacy.
Facebook has been selling information to government agencies and giving clandestine access to information security firms so that they can spy on people from all around the world. Some of these so-called whitehat infosec firms are working for authoritarian governments, such as those of Egypt and Syria.
Everything you do on Facebook stays on Facebook regardless of your "privacy" settings, and deleting your account is impossible, even if you "delete" your account, all your personal info stays on Facebook and can be recovered at any time. Changing the privacy settings to make your Facebook account more "private" is also a delusion. Facebook knows more about you than your family.
https://www.physorg.com/news170614271.html
https://itgrunts.com/2010/10/07/facebook-steals-numbers-and-data-from-your-iphone/
You cannot hide from the reality in which you, the people of the internet, live in. Facebook is the opposite of the Antisec cause. You are not safe from them nor from any government. One day you will look back on this and realise what we have done here is right, you will thank the rulers of the internet, we are not harming you but saving you.
The riots are underway. It is not a battle over the future of privacy and publicity. It is a battle for choice and informed consent. It's unfolding because people are being raped, tickled, molested, and confused into doing things where they don't understand the consequences. Facebook keeps saying that it gives users choices, but that is completely false. It gives users the illusion of and hides the details away from them "for their own good" while they then make millions off of you. When a service is "free," it really means they're making money off of you and your information.
Think for a while and prepare for a day that will go down in history. November 5 2011, #opfacebook . Engaged.
This is our world now. We exist without nationality, without religious bias. We have the right to not be surveilled, not be stalked, and not be used for profit. We have the right to not live as slaves.
We are anonymous
We are legion
We do not forgive
We do not forget
Expect us